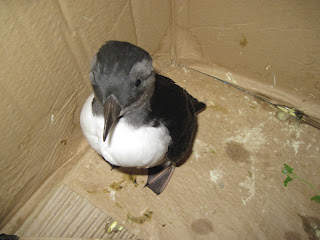 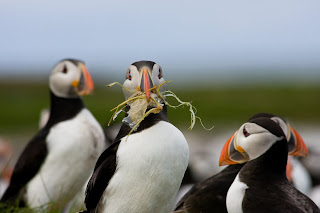 Is that really food mum? 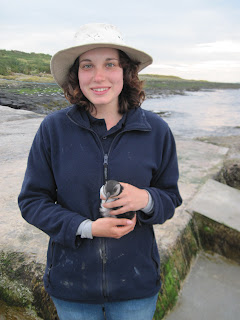 Monday 19th July comments: Puffin chicks are curious creatures. They are born underground in a burrow, in pitch darkness and remain there for forty days, being fed by attentive parents and then, without adult consent, leave and head out into the outside world. Under the cover of darkness, chicks will emerge and walk across the island until they reach something they have never seen before - the North sea.
Despite breaking waves, during the dead of night, the chicks will paddle out without any fuss, heading for the open sea where they will spend a staggering three years before returning (hopefully) to the islands to breed and join the large Puffin colonies of the Farne Islands (and now you know why visitors never see Puffin chicks...)
However not all goes according to plan. During the dark hours, a small number end up in buildings, lost and a bit perplexed. The Chapel and Information Centre on Inner Farne are favourite places and this is where the wardens step in. A helping hand (or a box for the day) and the Puffin chicks are soon released unharmed and the world as they know it continues. So welcome to the world of the Farne Island wardens - this event has been occurring for the past few weeks and will continue to do so for a bit longer yet. Last night we released thirteen - and with a lifespan of thirty years, they might even outlive this head warden on the islands!
Posted by Farnes at 17:39

Great pics and lucky puffin chicks living on the Farnes and having you all to rescue them , not sure about the bit that they MIGHT outlive you David , I had heard you are due to retire this year as you are 65 !!! they will definately outlive you !!! (Sorry) Hope all is well now and you seem to have connection sorted out .

ahh! they are so cute!