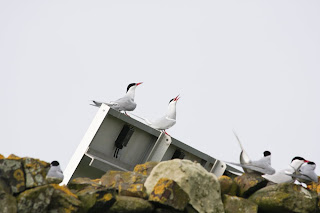 Coming to a head near you...the Arctic's have landed (Graeme Duncan) 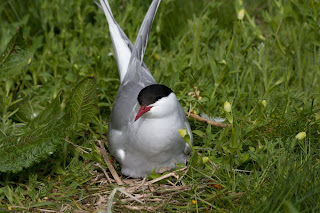 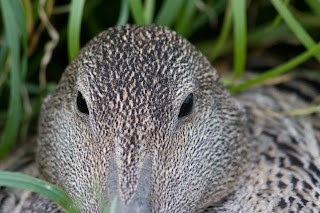 Tuesday 10th May comments: Its been another hectic week on the islands although the weather has finally turned and we've had a few closed days - although plenty of summer migrants arrived with the south-easterly weather front.

On the breeding seabird front, the vast number of Arctic Terns which have been roosting nightly with us have finally settled on the islands and it won't be long before they are laying eggs and doing what Arctic's do best - attacking people! The season seems to be rattling along as the first eider chicks have now hatched and more and more Shag chicks are discovered.

On the migrant front, it has been a busy island as both Spotted and Pied Flycatchers have been seen whilst good numbers of common warblers have been noted including our first Grasshopper Warbler of the year.
Posted by Farnes at 19:38