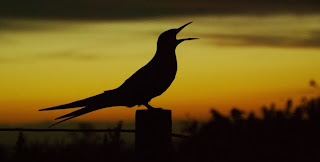 David and I were only talking to him last summer about his hopes for a 21st anniversary team re-union on the islands in October - no coincidence that this is our peak migration period! That fell through, but plans were well advanced for October 2012. That Gordon won't be here is our loss. He was, as they say up north, a 'canny lad' and will always be fondly remembered.
Posted by Farnes at 14:32

Just would like to say on behalf of Gordon's family, thank you so much for your kind words. Gordon is ( still can't accept saying 'was') one in a million. With his quirky ways, dry sense of humour, and love of wildlife (which started at a young age) he led a very simplistic but fulfilling life. We are just starting to realise just how much he was loved and respected by his friends and colleagues and it is a honour to be able to say he's my brother. We miss him so much and this has left a big hole in our life's, one that will never be filled, still do not want to believe he isn't here, and it's easier as one of his friends wrote to think he's just out twitching a rarity somewhere. Thank you Gordon for all the memories, stories, and most of all happiness you brought to each and everyone you knew.
Judy xx