Friday 12th April comments: Tonight we have decided to look at three breeding seabirds, looking at their first egg laying dates and answering the question – are we concerned about this late start?

Puffin
It’s been some start to the season as sub-zero temperatures and continued onshore winds resulted in above average mortality in March. The weather is yet to improve with the result that Puffins still haven’t settled on the islands (often seen coming and going on a daily basis). The first Puffin eggs have been discovered between 12 April-10 May with an average laying date of 27th April over the last thirty years. Although interestingly, the past six years has seen the first laying date become earlier and earlier, but this date will be checked this spring. 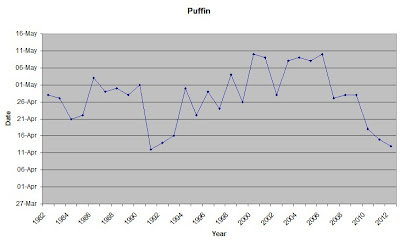 It’s been a tough winter and tough start for our Shags, as high winter mortality and an almost non-start to the season has raised many questions. However looking back, there have been fluctuations each decade although it is evident that the nesting season has become earlier in recent years with the first eggs discovered on 23rd March in the past two years. However this year, we are now expecting a much later date. In conclusion, the average laying date over the last thirty years for Shags has been 12th April. 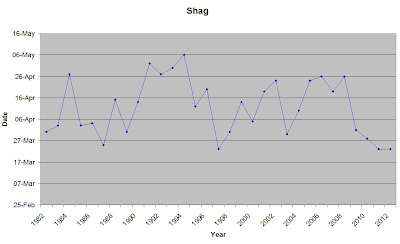 There is not as much variation for the first egg laying dates compared to the other two species as the first eggs have been discovered between 9th-30 April. However like other nesting birds, there has been a tendency for earlier and earlier laying dates in recent years. The overall average laying date in the previous thirty years is 18th April. 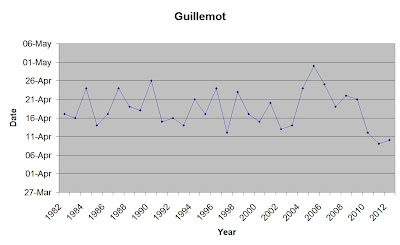 
Is our seabird breeding season going to be late: YES! For the majority of our early nesting seabirds; Puffins, Guillemots, Razorbills and Shags;

Why is it late: As a direct result of the weather.

Are we concerned about this late start? NO!

Why: Birds will adjust and settle down in the near future, a late season isn’t always bad news!

Any other concerns? YES!

What are these concerns: We have little concern over the early start to the season although the continued poor weather has certainly effected our seabirds. The seabird wreck along the east coast has concerned us, with Puffins experiencing one of the worst wrecks in fifty years. Shags have also struggled and a big worry is the very low numbers of birds on breeding territories.

Summary
Explaining why certain events occur in seabirds colonies is never as straight forward as many believe. So many influencing factors make predicting the effects of a tough winter difficult. One of the most important jobs we do on the Farne Islands is counting and monitoring the delicate and special wildlife that call the islands home. It is more important now than it ever has been to understand the fragile ecosystems surrounding us and our work on the islands could provide the answers to many questions. All we can do now is play the old waiting game and see what this season brings, which will include a full census of our breeding Puffin population. Its going to be an interesting time and we just hope we get some settled weather and a good breeding season for our seabirds.
Posted by Farnes at 19:44

Really interesting reading, thanks for the info.
I'm up there first week of June for my wildlife photography, later than usual, so, due to the late poor weather delaying things, what can I expect for the Farne Islands for that week (in your humble opinion) ;-)
Rod