A late straggler - an Arctic Tern ready to feed a chick 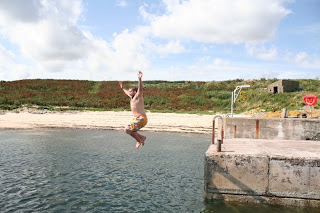 Adam enjoying the final day of July
Friday 31st July 2009 comments
It’s the end of July and the Farnes is about to experience a major change. As from tomorrow (1st August), Inner Farne will open its doors all day (the island is only open from 13:30-17:00 during the summer to reduce disturbance to the breeding seabirds). It’s also goodbye to Staple Island for another season, as the island closes its doors, having been open since 1st May but with the disappearance of the Guillemots and Puffins, Staple has lost its major attraction. The next stage for Staple will be the birth of the Grey Seal pups, but that’s not for another three months…

Its also change for the birds of the islands, as focus now switches to the migrants of the Farnes. The seabirds are heading off, having seen one of the most successful breeding seasons of recent years. However small migrant birds will start moving south and start using the islands as a service station, feeding up in the relative safety of the predator-free islands before moving on south to southern Europe and beyond. Its not just small passage migrants we’ll be recording, but also interesting seabirds blown off course, or waders from the high arctic on passage, or hopefully an odd rarity or two (just to quicken the pulse!). For the birders on the islands, its now autumn (but yes, its still summer).

Highlights: Cuckoo – a juvenile (our second of the year) arrived on Inner Farne this morning and spent fifteen minutes on the island before departing west, Wheatear 1 – out first autumn returnee, Swallow 6 south.
Posted by Farnes at 20:33