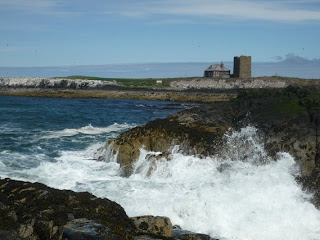 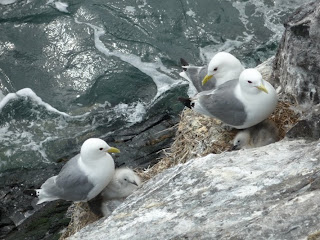 Don't look down - Kittiwakes on the edge
Saturday 1st August comments:
Welcome to August and what a way to start – we were closed! A strong southerly wind increased during the night and as dawn broke over the islands, we realised we were marooned, as no visitor boats were going to even attempt the sea which was crashing around the islands. Even a local fishing boat got into difficulty and had to be helped out by the RNLI and Humber Coastguard. It was rough, take my word for it!

It wasn’t just the sea which we noted as the shout went up “Sabines Gull on the flats” – a rare North American Gull had been picked out from the Browsnsman cottage as it roosted with Kittiwakes – wardens have never moved so quickly out of bed and moments later, the team were enjoying the 21st Farnes Sabine’s Gull, although I’m not sure what it thought of a bunch of lads semi-dressed having just rushed from bed (it was early after all). The bird showed well before departing and everyone agreed it was a cracking way to start the autumn season. Later that day we also bagged a Sedge Warbler on Inner Farne, again the first of the autumn amongst others.

Interestingly whilst walking around the island, I managed to grab an adult Greater Black-backed Gull (not to be recommended!) but the reason – it was ringed. Here on the Farnes we’ve not ringed GBB Gulls for over twenty years, so it should prove very interesting when the details are returned from the BTO. So watch this space!

Highlights: Golden Plover 7, Purple Sandpiper 36, Black-tailed Godwit 7 south, SABINE’S GULL - moulting adult on the flats on Brownsman – the 21st record for the Farnes and the first since September 2007, Roseate Tern 4, Swift 13 south, Sedge Warbler on Inner Farne – first of the autumn.
Posted by Farnes at 21:14

Hi - noted the comment on ringed gull. Today I read the digits "86" on left leg metal ring of Sandwich Tern at Port Seton in Lothian - probably completely insufficient to match against the large numbers you ring, but probably most likely origin - many birds seen here are ringed and I'm sure Farne's origin has been proved before. Photo here: http://sedgewarbler.blogspot.com/2009/08/late-summer-port-seton.html

Correction, it was on the right leg, as per photo!