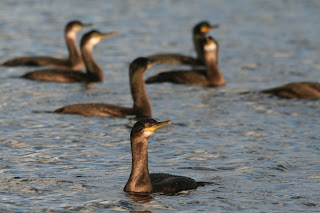 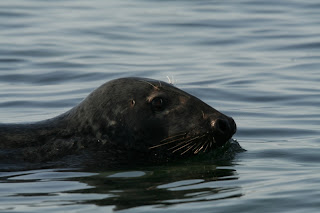 Not long now - the Grey Seals start moving in
Saturday 29th August comments:
Where has time gone? The end of the month is fast approaching and the seabird breeding season is well behind us now. Puffins haven't been seen for a few weeks, almost all the terns have departed Farne waters and I'm starting to forget what Guillemots and Razorbills look like, as its been a while since we last saw the auks around the islands. Even the Fulmars are at it, as youngsters have, at long last, started to fledge and within a few more weeks the islands will return to bare rock once again. Out of interest, a Staple Island Shag chick (darvic ringed) has been seen alive and well near Edinburgh, a movement of 114km north of us, so even the Shags are starting to move on (although the majority remain with us for the winter).
As time moves on, it won't be long before the Grey Seal season is upon us again, and its hard to believe its nearly a year since we were last dealing with them. As expected, we'll have the first pup born by the end of September and thereafter we'll be inundated, so watch this space!
As for bird migration, it still remains very quiet although the juvenile Cuckoo is attempting to break all Farne records as it lingers for its seventh day (plenty of caterpillars for it to eat) whilst small numbers of summer migrants continue to move South through the islands. A spell of easterly winds would bring huge numbers to the islands, but it's not looking likely in the near future so we'll just have to remain patient once again.
Posted by Farnes at 17:19

ooh the seals are returning! Not that I don't love birds, and puffins in particular, but there is something special and almost spiritual about seals.

If you wardens get any spare time have a look at Twitter and Gordon Buchanan's latest diary efforts
http://twitter.com/gordonjbuchanan
his new BBC programme Lost Land of the Volcano starts 8pm Sept 8th on BBC1.

Hi David just wanted to tell you to keep an eye out for an Osprey as our chick from Loch Garten is around your area in fact she was at Bamburgh , her latest fix was Longhoughton , so keep a look out for a Osprey with an aerial on its back that will be our Mallachie . Cant wait for the seals now . hope you are all well and that wood burning stove is well - burning wood !!!!!!!!!!