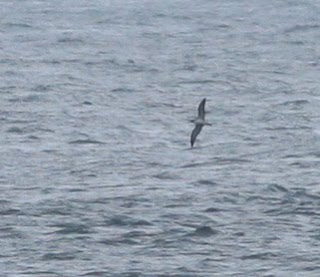 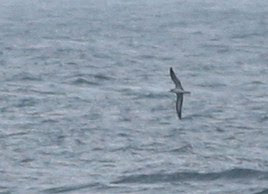 Cory's Shearwater heads north, Farne Islands
Saturday 5th September comments:
It’s not been a great start to the month for those wishing to visit the islands, following two open days, Saturday proved to be the third consecutive day we were closed, as the beefy North-westerly winds had whipped up enough swell to prevent boats from sailing. However we should be back open for business tomorrow (Sunday) but with rain forecast, it'll probably be grim (as they say).
It was another interesting day for sightings, as eyes were trained on seabird movement as the majority of migrants including yesterdays Icterine Warbler, had departed. The morning produced the biggest surge of records as a few hundred Manx Shearwaters were recorded, alongside the occasional Sooty Shearwater, but then news broke of a Cory’s Shearwater off Newbiggin-by-the-sea, flying north at 09:40 (Newbiggin lies about 20 miles south of the Farnes). Within the hour, the team were celebrating the successful sighting of the Farnes 13th Cory's Shearwater, as it skirted north around the islands, close to Inner Farne and then Brownsman (and was seen by the majority of wardens).