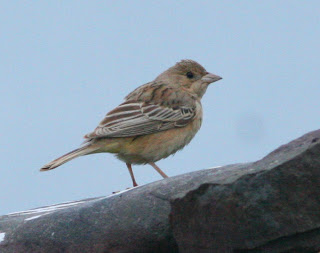 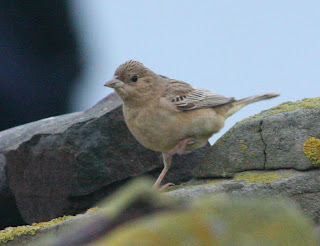 One step forward, the Bunting on a Brownsman wall (by Joe Cockram) 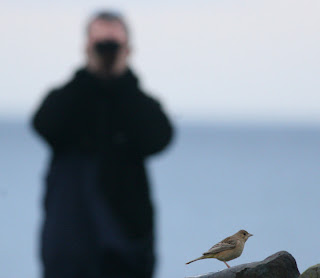 Proof I was there - me and the Bunting (nice one Joe!) 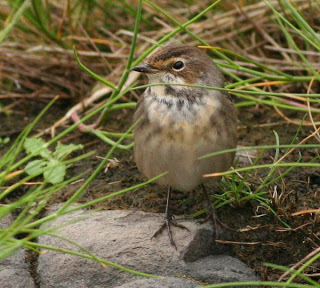 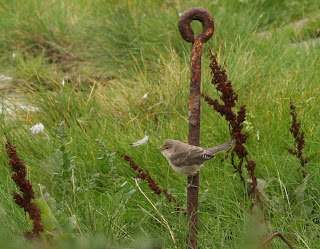 Barred Warbler, Staple Island
Monday 14th September comments:
The Farnes had just experienced a noteworthy day the previous day as a Humpback Whale was discovered north of the islands, the first ever encounter with the islands. Today was just as interesting, in fact for the birders amongst us, even better!!!

Following a very quiet start, a Barred Warbler was discovered on Staple Island before three Risso Dolphins quickened the pulse. This was only the fourth ever Farnes record of this large scar-headed dolphin, as three animals moved south through Staple Sound allowing good views for the wardens.

However this was just the beginning. Myself and Jason decided to leave Inner Farne and meet up with the Brownsman wardens (Joe and Adam) and take a look at the very showy Barred Warbler. The bird, a big gem, showed well but seconds later, we were distracted as a Bluethroat graced our presence. Here we were, on an island in the North Sea, watching Bluethroat and Barred Warbler – another good day for the Farnes. However things just got better.

Onto the furthest easterly island, Longstone and following the discovery of a few migrants including the autumns first Goldcrest feeding in seaweed (this is the Farnes after all), we discovered a Common Rosefinch. What a crazy few hours. Eventually after some celebrating, we headed back to Brownsman to take a look at some more of Joe’s quality photographs.

However the day wasn’t finished as the four birders headed up to Brownsman cottage, and then it happened. A bird sprung from the vegetation onto a wall and BANG, a Black-headed Bunting!! All four birders stopped, disbelieving and watching, looking at the bird. It was a Black-headed Bunting, a very rare eastern migrant which should be heading to Asia but is now on the Farne Islands!! This represents the fifth Farnes record and after some great views, note taking and photos, the lads celebrated. The Farnes strikes and what an amazing few hours. Something the four of us will not forget. Black-headed Bunting. Whatever next….role on tomorrow.

Well done boys, in August 1996 we found Booted Warbler and Yellow-breasted Bunting within 5 minutes of each other on Brownsman, at the time both being the earliest ever UK records for both species. Farnes magic !

Nice bird Steely, no doubting that one, shame it didn't hang aboot - cheers for the call anyhoo, see you at the next big one!

http://www.guardian.co.uk/environment/2009/sep/14/dead-humpback-whale-in-thames did you see this David . great pics and sounds as if you are having exciting times out there .