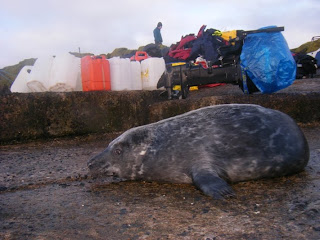 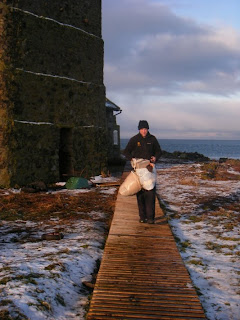 The move is on 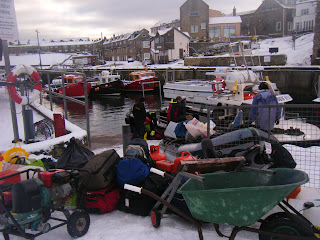 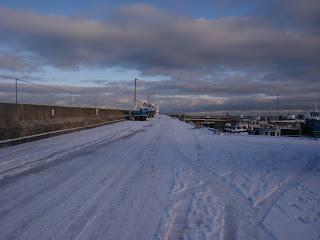 Seahouses Harbour like you never seen before - snow galore!


Monday 6th December comments:
What an epic. Little did we ever imagine that we would be leaving the islands for the winter in heavy snow! The final few weeks have been cold and bitter at times although we’ve got on with the job and even managed to find some interesting birds – the Stone Curlew was the most outrageous!

Departure day finally arrived on Saturday and as usual, Brownsman was evacuated and everything and everyone was moved to the jetties awaiting the final boat to take us west, to the mainland. The season has had its moments, the ups and the downs, the good and the bad, but at long last, we were leaving.
Having dodged the Grey Seals, the boat arrived on time to collect us and away we went to the frozen wasteland that was the mainland. I’ve never seen snow in Seahouses harbour and the place was covered, so it made life a bit harder but soon the team were in action, moving equipment, sorting recycling and storing boats for the winter.
Eventually the dust (well snow) settled and the team relaxed to celebrate into the small hours of Sunday morning in Seahouses. The season is over and the wardens have gone. Long live the Farnes.

However that not the end of the story. Keep reading as I’ll bring a team roundup, a seal roundup and much more very soon.
Posted by Farnes at 15:17

lovely pictures , aaaaw bought a tear to my eye , as you say LONG LIVE THE FARNES , so glad you have made it off and I wish you all a wonderful break , noone deserves it more and I do not think people realise just how hard it is out there , even I dont !!! you have my full admiration . Snow in Seahouses a first and I know you have been warden a few years David , so another first to add to the year along with sea eagles etc !!! Take care all and have a really wonderful fully deserved rest if that is possible . See you all 2011 xx

Report in The Times this morning:

More than 180 million gallons of oil could spill into the sea off Shetland and spread as far as the Norfolk coast after a blowout, according to an American company seeking to drill one of Britain’s deepest wells.

A spill could last for more than ten weeks and involve almost as much oil as was lost from the BP Deepwater Horizon well in the Gulf Of Mexico last year. Hess, an oil exploration company based in New York, applied last month to the Department of Energy and Climate Change (DECC) to drill a well called Cambo 4 west of Shetland.

With supplies running out from the North Sea’s shallow oil and gas fields, prospectors are targeting deeper, rougher waters where it would be harder to cap and contain spills. Oil would also take longer to break down in the cold North Atlantic than in the Gulf of Mexico.

The Times has obtained a copy of the environmental statement that Hess was obliged to produce with its application. The company said that its computer modelling system was unable to assess the consequences of a spill lasting more than ten days. The BP spill lasted 86 days.

Hess suggested that even a ten-day spill of 37 million gallons could destroy seabird colonies across Shetland, Orkney and the Faeroes and pollute some of Scotland’s most important fisheries. It said that attempts to contain the slick “are unlikely to be effective” because of the heavy seas and high winds common in the area.

The spill could even reach the coasts of Ireland, Norway, Germany and the Netherlands and spread down the North Sea into the Wash. The document said that the well would be protected by several systems, including a blowout preventer, the device that failed in the Gulf of Mexico disaster.

Hess said the Shetland Islands and their colonies of seabirds, which are protected under the European Birds Directive, would bear the brunt of a spill.The DECC is expected to make a decision in the next few weeks and Chevron, Hess’s partner, is due to start drilling in May. The House of Commons energy and climate change select committee expressed concern last month that inadequate equipment and poor planning could delay attempts to cap a leaking well off Shetland. The DECC gave Chevron permission last September to drill a well west of Shetland and is considering two more applications for deep-water wells: Cambo 4 and another Chevron well called Aberlour. A department spokesman said that a review into Britain’s offshore oil and gas industry would begin “once the findings of the US Presidential Commission report [into the BP disaster] have been thoroughly analysed”.

A Hess spokeswoman said: “The environmental statement allows experts, the DECC and the general public know the risks and understand the commitment we have to be prepared to respond to these risks.”