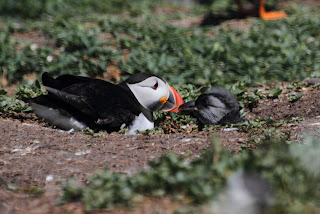 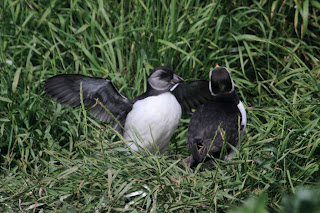 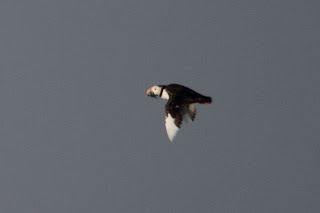 A white winger... (Mark Breaks)
Tuesday 12th July comments: I keep saying it, but where has time gone? I’ve been away for just over a week and thought it was time for an update from the Farnes.

The breeding seabird season is almost over as the early nesters have now fledged chicks the the majority of other seabirds are almost done for the season. Although we’ve yet to crunch numbers, it appears to have been a very successful season for all seabirds concerned.

The majority of Arctic Terns have fledged two chicks per nest whilst good numbers of Sandwich tern young are now on the wing. Huge crèches of Shag young can be seen whilst vast numbers of fledged Kittiwakes indicates a brilliant season. The cliff-tops are also boasting great successes as Guillemots and razorbills have long gone (with good numbers of young)

As for the Puffins – despite the patchy weather, it’s been another good year and the number of chicks leaving under the cover of darkness has been staggering. It all indicates that the breeding season is almost at an end and we can all breath a big sigh of relief.

The islands are now starting to produce some interesting sightings and recent highlights included:

Spoonbill – one south over Longstone on 10th July

Wader passage is now underway with Green Sandpiper the highlight so far.
Posted by Farnes at 14:53