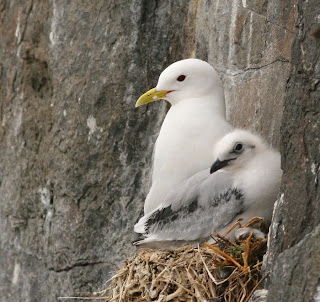 Kittiwakes having a bumper season - young have started to fledge 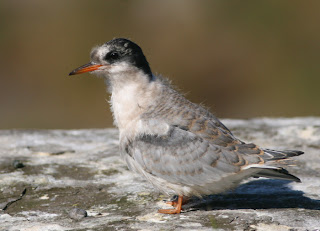 Nearly there - an Arctic Tern youngster

Wednesday 29th June comments: Another glorious day on the islands and the action continued as a few more Kittiwake youngsters took to the wing for the first time. At present, it appears to be another cracking year for Kittiwakes, our third consecutive year we've enjoyed a bumper crop of young (following a ten year decline).

It's not just the cliffs nesters which are reporting a good season as the first Arctic Tern fledger is only days away from flying and within a few weeks, we'll hopefully be reporting another successful year. A quick study yesterday revealed that two youngsters from the same nest were fed sixteen times in ten minutes - now that is rapid foraging!

Wader passage is gradually increasing with over 200 Knot present on Longstone whilst 23 Black-tailed Godwits flew west over the islands yesterday. Soon we'll have return autumn passage migrants and then the fun will really start!
Posted by Farnes at 19:29