Deal or No Deal? 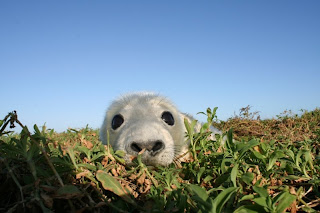 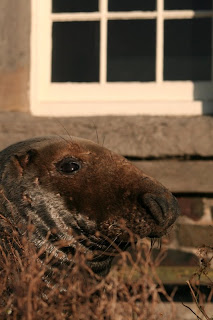 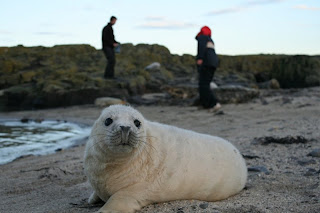 Back in action - the team on the Northern Hares

Thursday 26th November 2009 comments:
Day fifteen and we had two options. The sea had calmed for a few hours to allow a quick trip to Seahouses or were we going to visit the Seal colonies to see exactly what had been happening out there? True to the spirit of the Farnes and the dedication of the team, we took the latter option.

Madness? Possibly. Crazy? Certainly. It may have been those kelp crisps affecting us from yesterday or just the desire to get the job done. Either way, we didn’t go to Seahouses and by midday, the strong westerly winds had returned and we weren’t going anywhere. People have asked how we have been stuck for so long, but to get an 18ft Zodiac inflatable boat across the North Sea from Brownsman to the mainland to get some shopping and return safely, takes time. At this time of year the weather and the sea state can change instantly and we can’t take chances, you only get one with the North Sea.

So the mainland remains distant but we’re not too worried, the weather looks good for the weekend and hopefully, if our calculations have worked, we’ll be off and celebrating in a pub. If not, then Seal milk might just be on the menu…

Its been a while since we were on the seal colonies, especially the South and North Wamses, and its early days but we’ve certainly had some casualties in the storms. The Farne mortality rate is always high, up to 50% of pups do not make independence and looking at the state of the colonies, we’re heading towards that figure for this season. The strong winds and big seas have seen youngsters washed away but only time will tell, once numbers have been crunched. Its a harsh world out here, for wardens and seals alike.

Farnes Seal pup population to date:
North Wamses 269
South Wamses 393
Northern Hares 69
Longstone 4
Big Harcar 6
Nameless Rock 1
Brownsman 140
Staple Island 315
Island total: 1,197
So with the Seal work complete, our attention returns towards the mainland. Will our gamble have paid off? Deal or no deal...
Posted by Farnes at 20:02

I've been checking this blog several times a day to see how you're going on and if you've got supplies yet! How dedicated to devote yourselves to the seal count & check, and not head for supplies and beer!