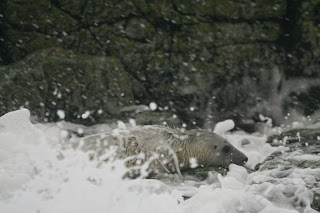 Helpless - a seal pup in trouble 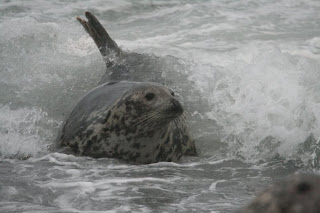 Looking on - a concerned female


Sunday 29th November comments:
Storm force by name, storm force by nature. The Farnes have been battered today, as the northerly winds arrived, hammering everything in its sight, with big breakers smashing over the islands. Anything or anyone wouldn’t take this beast on, it had intent as temperatures plummeted and the sea grew in size and force. It’s back to business, the hard way.

With food, water and gas supplies in plentiful supply, our attention now focuses on the Grey Seals but it’s not going to be easy. The northerly storms will claim pup lives, but that’s what we expect at this time of year – it more the survival of the fattest than the fittest, but if pups can get away from the rocky shorelines, they’ll stand a chance. If they don’t, they’ll just become another Farne Islands statistic. We won’t know the extent of the damage until we enter the colonies, but looking at the forecast, that’s probably going to be mid-week.

The northerly backed wind also produced some reasonable sea passage including a lingering Storm Petrel, which spent over four hours feeding just offshore in the lea of Brownsman – a delightful sight in the chaos of the North Sea. We also had five Black Guillemots and four Puffins.

Cetaceans: Porpoise 1 breaching in Inner Sound.
Posted by Farnes at 19:25

Oh dear I so hate to see those little ones in trouble , you must find it hard to watch and take pictures , I know its nature but very hard when you see those helpless eyes looking at you I am sure . Glad you are all okay , I shall try not to think of those babies tonight . Take care all

I agree Kezia, poor little pups, I hope there are not too many losses.