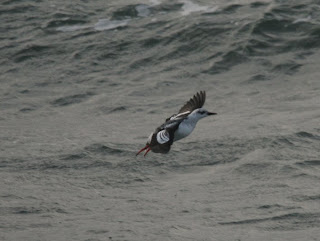 A Farnes speciality in winter - a Black Guillemot near Brownsman 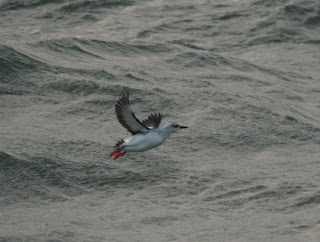 Smart - the first-winter in flight

Monday 30th November comments:
Another day of strong winds from the north and there was even a threat of snow, although it never arrived, not yet anyway. The team were confined to the cottage today as we made progress on various bits of work and reflected on the overnight storms. The cottage was battered and although a few tiles had become dislodged, this place is built to last, so no lasting problems.

The outcome of the storms on the Grey Seal pup population remains unknown as the weather prevented us from accessing the colonies, but that may change tomorrow with the changing of the weather. Today seawatching brought only a handful of noticeable passage birds although their was a stunning surprise - a Leach’s Petrel showed well near Brownsman as it pattered its way north across the raging sea.

Still sounds bad out there hope the weather improves tomorrow so you can get out to look at the seal population good luck , cold down south tonight but I am thinking about those poor new born babies struggling against those seas - not a good start but survival of the fittest .

Today is bright and breezy in Leicestershire, I hope you are past the most recent bout of storms now and able to get out and see how things are going. We've not had snow but hard frost yesterday and Monday. Many small birds in my garden stocking up on food.
I hope you lads are all surviving the cold and blast, and that the seals aren't too decimated by the latest tempest.

Senad a Tystie down to St Marys please