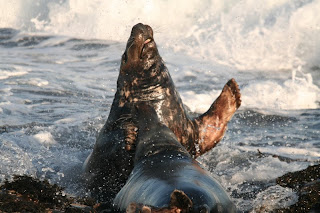 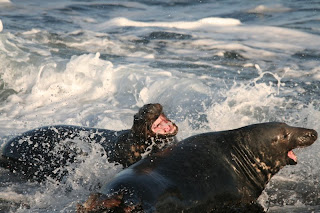 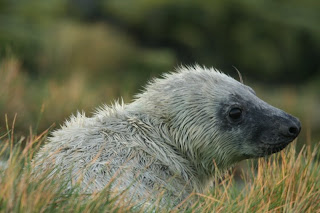 Young and innocent - a Seal pup looks on
Wednesday 4th November comments:
November is now upon us and the islands are now officially closed to visitors although visitors boats do ‘sail around’ showing people the breeding Grey Seals and their pups. The final few days of October and the opening few day of November were dominated by one thing – the weather. However following several days of strong winds, yesterday and today brought a refreshing change – a clam spell of weather!

The weather window allowed the team to access the Seal colonies and we’ve now peaked at 506 – an impressive number but with plenty more to follow. Both days were spent marking, tagging and counting the pups, both dead and alive. Thankfully, the number of dead remains low and we hope to keep it that way. However life as a small seal pup can be brutal, as we witnessed a bull seal, defending his territory, just throw a pup across the colonies like a rag doll. Thankfully the pup survived although rather shocked and dazed. As for the bulls, there is some serious fights starting and its best to stay clear, these guys don’t mess and it can get bloody.

On the migration front, the Richard’s Pipits finally departed the islands on 30th October having been here since 11th October – no surprise that it broke all previous Farne records for lingering Richards Pipits. The island avifauna has also changed as a lingering flock of Snow Buntings (up to 21) reminds us that winter is almost upon us whilst Twite and Linnet are present daily. One disturbing sight today involved a few oiled Guillemots around the islands – we’re hoping its not a serious issue and we’ll keep a very close eye on this situation.

Isn't it a bit shellfish to be boasting about your clam weather?

Hi David and Co my main computer is still sick so netbook in use but not brilliant , so just caught up . We have been celebrating Archies 1st birthday this week so Archie the seal is a year old as well , lets hope he is swimming the seas all safe and well . Great pics Davy really good but keep away from those bulls goodness me they get really stressed dont they , that poor pup so glad he survived . Take care all and hope the weather is kind .

should have said also that was funny 'general' bought a smile to my face - shellfish clam - haha very good ,you could say David and Co are in a good plaice as well !!!!