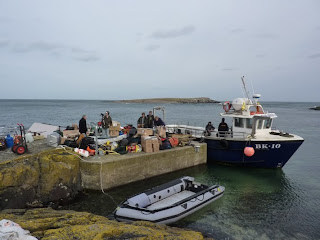 Landing day on Friday - everything but the kitchen sink 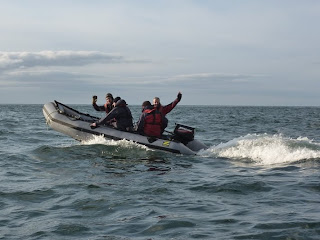 The team in the Zodiac visiting the outer group 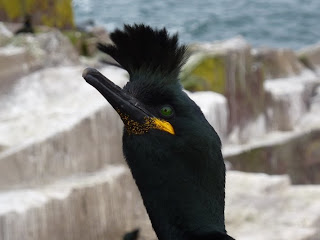 Back on nests - Shags in fine form 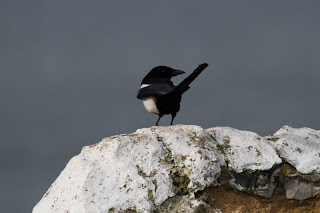 A true rare - the Farnes fifth record of Magpie
Sunday 21st March Comments:
Welcome back, we’re back!! We’re back on the Farnes and over the next nine months, I’ll bring you the news, views, spills and thrills from the islands so log in and enjoy the world of planet Farnes. Following the customary mainland training for the week, the team moved back onto the islands on Friday and so life begins for the island warden team.

As usual a large amount of equipment and personal stuff was moved from the mainland – a job which took the majority of Friday. On arrival the ‘old hands’ noticed a few changes – we’ve had a major revamp of the accommodation, but I’ll tell you more soon. However some things don’t change, and Shags were present in good numbers on breeding cliffs whilst Puffins and Guillemots were noted in reasonable numbers. It’ll be a few weeks before everything settles, but the calm conditions have encouraged some early activity on the islands.

Migrant birds have been recorded moving through the islands with Siskins, Greenfinch and a singing Reed Bunting standing out whilst other highlights of note include 27 Whooper Swans through Inner Sound, whilst a drake Goosander was seen on arrival. The usual ‘resident’ Peregrine has been seen daily whilst a Sparrowhawk moved off west to the mainland. However the real star bird came in the shape of a Magpie this morning – only the islands 5th ever following records in 2007, 1997, 1993 and 1983. They may be common on the mainland but not out here - they are rarer than Yellow-breasted Buntings and Red-throated Pipits!!

So welcome back and its nice to be back - the Farnes season starts here.
Posted by Farnes at 20:55

Good to have you back!

Great to have you back Farne Team . Superb pics as usual . Look out for those Ospreys maybe flying overhead on their way north I seem to remember you saw one last year or maybe I dreamt that ????? Take care all and settle down to Island life again , looking forward to updates .