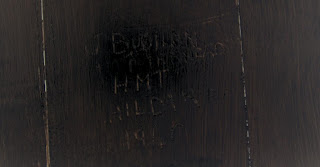 Etching in the ceiling
Friday 26th March comments:
Following yesterdays thick fog, we woke to clear skies but strong winds. The wind from the south had picked up during the night and it was battering the islands so we won’t going far. As part of the teams work during the first week back has been to paint the main dormitory of the Pele Tower and that led to an interesting discovery late this afternoon. New warden Tom Simon (whilst painting the ceiling) made a discovery of an etching on the ceiling which is shown above. The etching read…

This has lead to much discussion amongst the team and thanks to the wonders of the Internet we have discovered a few things about the etching. HMF Hildina was a 300 ton steam fishing trawler assigned for a Navel Mine Sweeping role from 1939-1946. It appears to have survived the war and was returned to her owners in April 1946 but sank in Muckleflugga off Shetland on 1st December 1953.

Information is still limited (any help would be very much appreciated) but it appears that there were two J.Buchans from Peterhead, but sadly both lost theirs lives in 1941. Was one of these men the resident of Inner Farne who scribed his name on the ceiling? It’s raised a lot of questions and if anyone reading has any information, please drop me a line as it’s a great story from the islands history.

On the islands, very little was happening although Puffins returned despite the strong winds. Migrant birds were few and far between, although a few ‘left-overs’ lingered from yesterdays arrivals.
Highlights: Whooper Swan 11N Inner Sound, Black Redstart for second day, Wheatear 2, Fieldfare 3 and Chiffchaff 2.
Posted by Farnes at 22:00

I can foresee celebrities and TV crews heading your way soon. Spin it! And tuck up tight tonight as there could be 'a clanking and a wailing' as the ghosts have been awakened. Or it's just friday night :)

Wow thats interesting , as Tim says contact all the media as someone doing family history will surely know this person , there will be a group that deals with Peterhead and as I am on the family history sites would be happy to put a request out for you if you would like , wonder if you find anything else whilst decorating , let me know if you want me to put a message up on one of the lists .

Alright Steely! Good luck with finding out about the etching...sounds really interesting! Although I should imagine that there are more than 2 J buchans from peterhead....Buchan is a very common surname up this way.