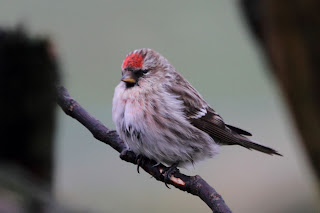 Stunning - the Common Redpoll for its second day (by Mark Breaks) 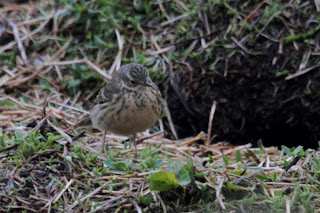 One of two Litteralis Rock Pipits (by Mark Breaks) 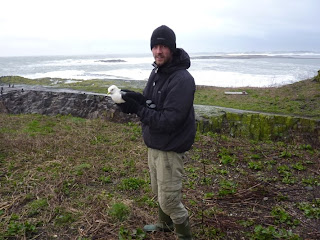 Ready to go - the first Kittiwake released by Jason 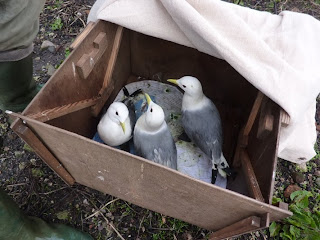 Three in a box - Kittiwakes ready for release - safe and sound

Wednesday 31st March Comments:
It was another wild day, with driving rain and strong easterly winds. The Kittiwake saga came to a very satisfying conclusion as all eight survived the night and flew strongly out to sea at dawn. It was great work from Jason and the team, helping these birds through the night (I’m sure they would not have survived if we hadn’t intervened). The majority of our seabirds were very scarce today – it’ll be several days before we see them back again, such is the nature of the storm.

Although the seabirds were scarce – something replaced them – migrants and lots of them. The weather had grounded good numbers of common migrants with a sprinkling of rarer species including a stunning Bluethroat and an impressive nine Black Redstarts. Due to the weather (mainly the sea state), no other islands were checked but we did wonder what was out on the other islands, especially Staple Island and Brownsman…
Highlights (Inner Farne only): Long-tailed Duck 8, Goldeneye male, Lapwing adult, Snipe 3, Purple Sandpiper 60, Wood Pigeon 1 (a scarce visitor!), Dunnock 8, Rock Pipit 2 very smart summer plumage Litteralis birds lingering, Grey Wagtail west, Bluethroat (potential ‘white-spotted’), Black Redstart 9, Robin 20+, Stonechat, Wheatear 3, Song Thrush 7, Blackbird 3, Chiffchaff 5, Willow Warbler 2 (earliest ever Farnes record), Blackcap male (joint earliest ever Farnes record), Common Redpoll for second day, Chaffinch 13 and Reed Bunting.
Posted by Farnes at 23:08

You guys do an amazing job, but what an introduction to the new team members!

Brilliant sunshine and blue sky in Leics today. Hope it's better where you are. Take care. x

Sounds like an eventful start! Have a cracking year. Looking forward to lots of gripping rares shots from Mr Breaks....

Brilliant news about the Kittiwakes.
John