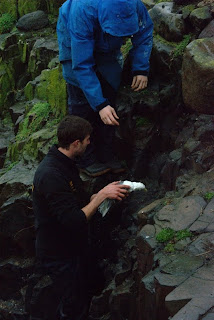 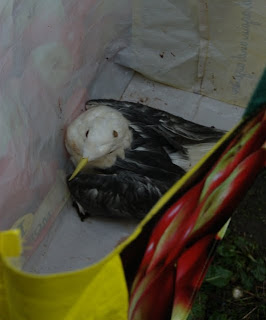 Battered but alive - an adult Kittiwake in a bag

Tuesday 30th March comments:
Mother Nature wasn’t messing today – she threw everything at us including the kitchen sink. Backed by the highest spring tide (at a whopping 5.2 metres – we normally have tides of 4 metres), it was dramatic. The easterly gale battered us all day long and the rain never stopped. There were areas of the island under water which have never been underwater and its been an interesting introduction to island life for the new lads amongst the team.

The breeding birds were present all day – Puffins were on the islands in vast numbers – probably escaping the brutal storm that was raging out to sea, whilst Shags were clinging onto whatever nest structures remained. However its been a difficult day for Kittiwakes. The shear strength of the storm and brutal driving rain appeared to have weakened the condition of a lot of adults (and probably prevented them from feeding) but up step the warden team – led by Senior Warden Jason Moss.

A total of eight adult Kittiwakes, battered and bruised by the raging north sea were rescued from a narrow gut on Inner Farne. The birds were literally dragged from the surf where they were being battered and placed in boxes to dry and preen. The birds have remained with us overnight in the Pele Tower and fingers crossed for a safe outcome tomorrow morning. For everyone rescued, its frightening to think how many have been lost. Its been a deadly storm and we may be counting the cost for some time to come.

On a positive note, news was breaking that the first Shag eggs were discovered on the very early date of 28th March – although I'm not sure if they have survived the storm today. We’ll wait for conditions to calm and then we’ll pick up the pieces or what is left. Until then, we'll just wait and help where we can.
Highlights: Shoveler 2 pairs in the Kettle, Snipe 2, Sandwich Tern 3, Dunnock 2, Robin 16+ - major influx – this is just an Inner Farne count, Black Redstart 2, Ring Ouzel male, Fieldfare 2, Song Thrush 2, Chiffchaff 5, Goldcrest 2, Chaffinch 2, Common Redpoll male showed well all day.
Posted by Farnes at 23:11

Well done lads in such dangerous conditions. Its sad to think how many poor birds may have lost there lives but its fantastic that you have saved some. THANK YOU SO MUCH for what you do, i'm sure many people will do so in person when they visit this fantastic place.
THANKS AGAIN GUYS
Best wishes and keep safe
John Atkinson

Your blog has been recommended to us as a interviewee's favorite blog!

We would like to do an interview with you about your blog for Blog
Interviewer. We'd
like to give you the opportunity to
give us some insight on the "person behind the blog."

It would just take a few minutes of your time. The interview form can
be submitted online here Submit your
interview.

Well done from me as well , keep safe and hope those Kittiwakes survived the night and have freedom today , they are lucky to have you there to give them a chance . Take care

Hope you have a good season... oh, and give my regards to Mark !