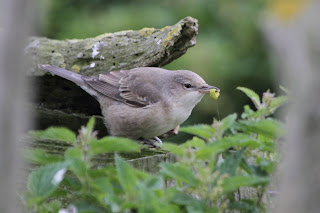 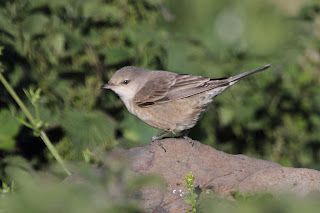 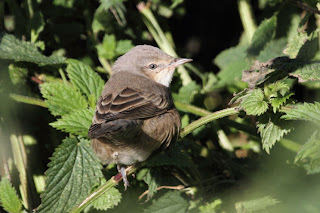 Skulking away - Barred Warbler on Brownsman (Mark Breaks)
Friday 20th August comments: GOOD NEWS!! The technical problems are almost at an end and from Monday, the blog will be back to normal bringing you (almost) daily updates from the islands.
Its been a mixed week as the weather has been the talking point although it has brought in a few more migrant birds, including two Barred Warblers on Brownsman (also known as 'Barries' on the islands). These bulky Warblers are seen annually on the Farnes and its arguably one of the best sites for them (in England anyway) with 43 seen since 2000 - not a bad record which most birding sites would be proud of. Other than that, a small selection of common migrants have been keeping us ticking along and soon September will be upon us and anything is possible...
Posted by Farnes at 10:55