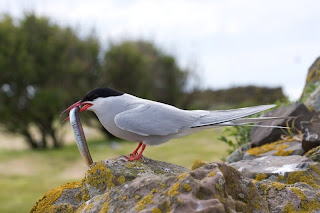 Gone but not forgotten - an adult Arctic Tern 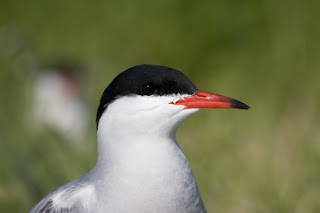 On the up - Common Tern
Thursday 26th August comments:
It’s been a quiet few days, although bright sunshine has finally descended onto the islands bringing lots of visitors and a few birds along the way. Sadly, there are literally only one or two Puffins around and that’s not many across thirty-two islands! Due to technical difficulties earlier in the season, I failed to bring everyone up to speed with breeding seabird numbers, so here goes, starting with the Terns.

Arctic Tern
Population this year: 2,199 pairs (Inner Farne 1,110, Brownsman 1,079, Staple 10)
This is an increase of just one pair on last season, so you can say the population is very stable and has been for the past five years or so. The first eggs were laid on the islands on 12th May with the first chicks hatching on 4th June. It wasn't long before the first fledgers were seen on the wing, on 27th June and by the end of July, the entire population had moved off the islands.

Sandwich Tern
Population this year: 1,019 pairs (Inner Farne 761, Brownsman 258).
This is a drop of 396 pairs on last year – a worrying trend for Sandwich terns on the islands – we use to boast 2,000 pairs less than ten years ago. Its difficult to explain the drop in numbers at this early stage, but it may be simply down to breeding birds choosing another colony nearby (ie Coquet island) to breed this year - lets hope they return next year! The first eggs were discovered on 4th May with the first fledglings in early July.

Common Tern
Population this year: 112 pairs (Inner Farne 110, Brownsman 2)
The small Farnes population showed a welcome increase of 14 pairs, mainly on Inner Farne. Sadly there was not a repeat of last season's breeding attempt by Roseate Terns this year.
Posted by Farnes at 11:20