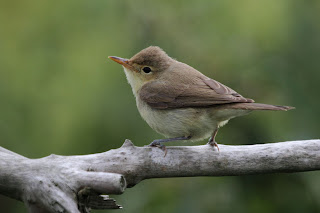 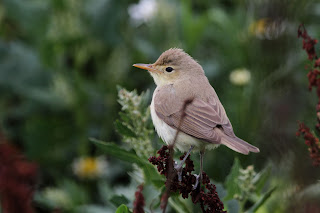 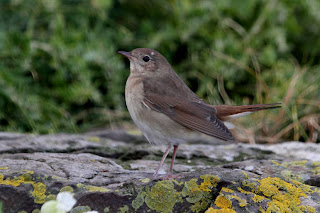 Second for the Farnes - Thrush Nightingale on Longstone (Mark Breaks) 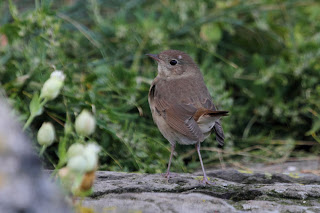 First in Northumberland since 2002 - and that was on the Farnes as well! (Mark Breaks)
Sunday 15th August comments: The Farnes – its great, it really is. It’s an amazing place for breeding seabirds, it’s an incredible place to visit and for the privileged few, it’s an amazing place to live. It’s also very good for pulling in migrant birds – arguably one of the best in the north-east (seen as we stick 4 miles out to sea!)

So, why then, after ten years and all my knowledge of the place, did I decide to leave the islands for two weeks? I thought to myself, yeah, it’s early August, generally a quiet time for migrant birds and good to have a break to recharge batteries after another long season.

What I wasn’t expecting was for the team, lead by Senior Warden Jason Moss, to go and find a load of rare birds – that wasn’t in the script (I'm sure they were trying harder....) The boys have worked hard but have played hard – finding not only a ‘second for the Farnes’ (Thrush Nightingale yesterday) but also a ‘first’ for the Farnes and Northumberland! (Melodious Warbler) Chuck in a few other good birds (adult Sabine's Gull etc) and yes, you’ll agree, I’ve made a mistake. When I return, I’m not leaving. If anyone is looking for me, I’ll be on the Farnes until December and will not be leaving until then.
On a serious note, it’s been a great week for the team as they have discovered a Melodious Warbler on Brownsman followed by a Thrush Nightingale on Longstone – both very rare birds and a great way to start the autumn migration. So well done team and I'm certain there will be more to follow (so long as I'm there!).
Posted by Farnes at 16:45

Well done team for sure and superb pics thank you , bet they really laid into you when you got back David , I am sure there is more to come yet and a few more firsts I am sure , any Ospreys yet ???

Hi farnes, nice post & good blog, i think u must try this site to increase traffic. have a nice day & keep blogging!!!