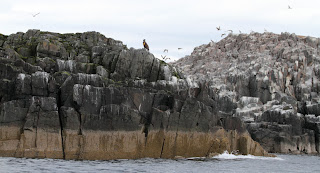 That's no Guillemot...
(by Mark Breaks) 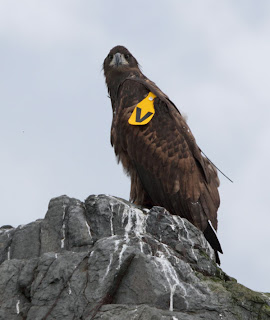 Who are you looking at...
(by Mark Breaks) 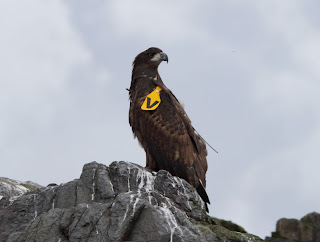 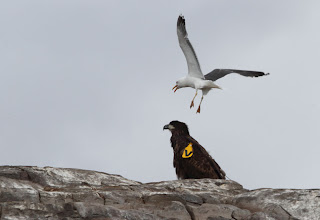 A local Gull having a go (by Mark Breaks) 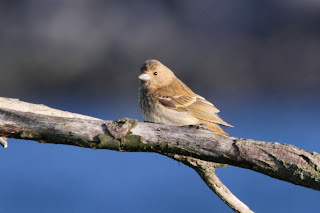 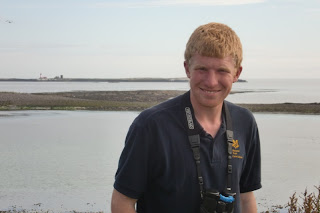 Sunday 29th August comments:
What's that coming over the hill, is it a monster, is it a monster...
Well yes, yes it was.
We weren't expecting it, the visitors weren't expecting it and the local seabirds weren't expecting it, but yesterday an immature White-tailed Eagle decided to drop onto Staple Island. If anyone has seen one of these monsters, you'll know what I'm talking about. There huge - a barn door with wings, as these birds boast a wingspan of almost 2.5m (about 7ft!) and there even bigger than Golden Eagles.
Just after 3pm, boatman Andy Douglas phoned the wardens on Inner Farne to report that he had just seen an Eagle leave Crumstone and head over to Staple Island. In disbelief, the warden team cranked into action and soon they were enjoying stunning views of the beast, as it tucked into a local Shag on the island - yes it was eating a Shag!
The bird, a wing tagged immature (a yellow tag with the letter 'V') was complete with a radio transmitter, is probably one of this years release birds from the east of Scotland releases (now in its fourth year). Birds have been known to wander as another individual took up residence on the Isle of May (just to the north of us), so you never know.
Although we officially can't 'count it', it's an awesome visitor and something not many people would have dreamt of seeing out here, so we'll enjoy it although I'm not sure our local seabird population will enjoy it as much. Alongside the Eagle, our second Common Rosefinch of the year appeared on Brownsman with our third Barred Warbler - its autumn passage on the Farnes.
On another note, it was a great way to celebrate resident warden Mark Breaks birthday - happy birthday Mark - just don't stand around for too long in case the Eagle fancies a spot of lunch!
Posted by Farnes at 12:21

Oh wow! What a fantastic bird. You can get an idea of its size from the first photograph as it's surrounded by all the smaller birds.

Hi all,
Thanks for the mention, it was very kind of you. I hope its stays for a while but i bet the shags don't.

Amazing news, would you believe I just heard about it from one of the RSPB people on the Isle of Mull via twitter? Your fame spreads far and wide!
They really are amazing birds to see, but I can bet why it's better to have it arrive now than in peak season.