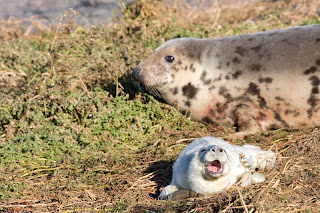 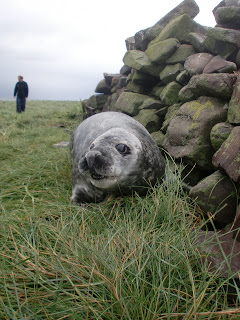 Friday 22nd October comments: we made it onto the Seal colonies early this morning although with a mountainous sea, we didn't stay for long. The islands have remained closed to visitors since Monday and things are not about to improve - the forecast for the weekend is brutal - these early born youngsters are going to be in for a torrid time. Hold on to your hats, the storms of the autumn are about to kick-off and for some old timers, its a case of here we go again...
Away from the impending chaos, the seal colonies were full of life this morning, with the islands boasting over 110 pups, the majority on the North and South Wamses with a light scattering on Brownsman and Staple Island. Time appears to be slipping by quickly as we even discovered our first 'second-coat' pup - success already and we've only just begun! We also witnessed a youngster from previous seasons, in amongst the adults on the colonies - Archie? Lucky? - maybe but regardless, all was well with the Farne Islands Grey Seals for the time being.
Posted by Farnes at 15:42

Hold on to your hats folks !! not the terns now but those storms eh some of those poor babies have a rough start in life and nature can be horrid we all know . I would love to think that Archie and Lucky are around somewhere but I am sure a lot of the young return and I guess a lot dont , take care all batten down those hatches !!