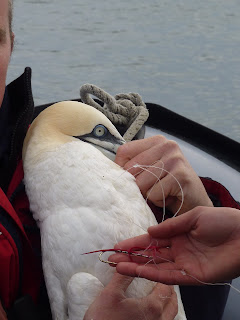 Ouch that has to hurt 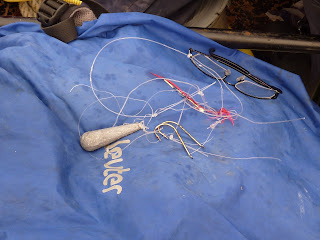 Hook, line and sinker - removed from the adult Gannet 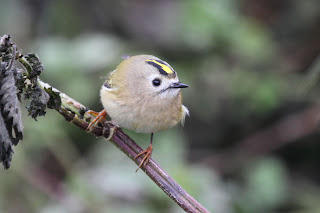 Goldcrest - one of several hundred on the islands
Thursday 14th October comments: Its been another frantic and exciting time for the Farnes as the wind (once again) blew in from the east, bringing with it hundreds of common (and not so common) migrants to the islands. From the outstandingly rare Olive-backed Pipit (a bird of central Siberia) to hundreds of Robins, Goldcrests and Chiffchaffs, which have descended onto the islands. The Farnes at this time of year transform, from the seabird colonies of the summer to the 'service stations' for migrant birds of the autumn - it really is a magical place.

However our attentions were drawn to seabirds for a brief period as we had to undertake a full on rescue, as an adult Gannet was discovered entangled in fishing-line complete with large hooks and lead weight. Thankfully we were able to rescue the bird and remove the offending material, before releasing the bird unharmed back into the wild. This bird got lucky (unlike its rescuers which were bitten to shreds by its powerful bill) as discarded fishing-line can be a real concern for seabirds but I’m glad to report that these kind of incidents are very rare (and long may they stay that way!).

Away from the wonders of bird migration and the Gannet rescue, it won’t be long before I start bringing you the news of our Seal pups as its mid-October and its ‘pupping time’ once again, so watch this space…
Posted by Farnes at 18:24

So glad the Gannet was okay , lucky bird who obviously didnt appreciate your help but then perhaps he was paying back a human for the human who discarded the line etc . Hope the wounds are healing !!!! Looking forward to seeing pics and hearing about the pups

That's one lucky Gannet Steely. It's a good job you and the guys were on the case. On another note, I was looking at the weather for late October the other day and saw a few -11's heading your way, hopefully the new summer colour scheme inside the cottage will keep the cold out :)