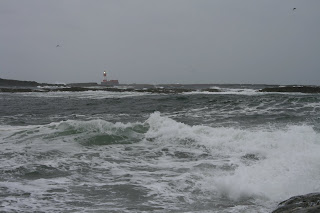 A moody sea against the backdrop of the Longstone Lighthouse

Saturday 23rd October comments: The forecasters got this one right. The stormy weather arrived, hammering the islands during the small hours of Friday night and as dawn broke on Saturday, we were greeted by heavy seas and constant drizzle. The islands, as expected, remained closed to the public (a great start to the half-term!) although eyes were trained on the sea, as a good number of Little Auks were logged flying north.
As for the Grey Seals and their pups, they just got on with business as usual, finding shelter away from the worst of the weather and keeping those pups safe from the moody sea. It'll be some time before we get a chance to inspect the colonies and until then, we'll be keeping safe and warm ourselves.
Today's highlights: Little Auk 118 north, Sooty Shearwater 39N, Manx Shearwater 2N, Great Northern Diver 1N along with a small scattering migrants including Woodcock.
Posted by Farnes at 18:41