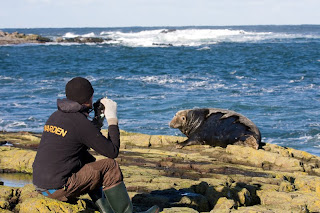 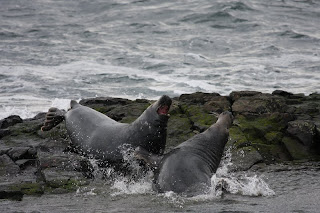 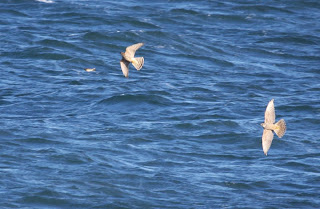 Thursday 21st October comments:
Tomorrow we’ll start the process of counting the young, logging the dead and watching the trials and tribulations of the Grey Seal colony on the Farne Islands. The team are poised and ready, and so are the Seals – the pups have started to be born and we’ll soon be in the thick of the action.

However it’s been a frustrating time on the islands as strong winds from the north (we weren’t expecting it!), have prevented movement to the colonies (we’ve been cut off since Monday). However the wind is expected to ease tomorrow and so our seal mission will begin and as usual, I’ll bring you all the news.
Due to the switch in wind direction, only small numbers of migrants birds are passing although things have become a little more deadly for them, as the islands now boast resident Merlin and Peregines. Its interesting to watch the change in the seasons as Eider ducks are starting to display again whilst Long-tailed Ducks and Goldeneye have returned to winter around the islands in small numbers. Its all change once again and it won't be long before those clocks go back and the dark nights set in...
Posted by Farnes at 20:39

Busy time for you , I see young Gordon B is up on the Orkneys for Springwatch this year , it was two years ago they were with you and my little grandson Archie had a seal named after him , I do hope Archie the seal is still swimming the ocean and that he doing well like my grandson . Big Oh Dear for the little birds with Merlins and Peregrines around , thats life I guess and they have to eat , just hope they dont take the rarer species . Did you ever get news as to where the White Tail went ?? Take care all

I should have said Autumnwatch not Springwatch !!!! wish it was