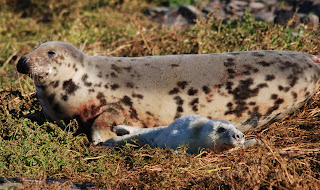 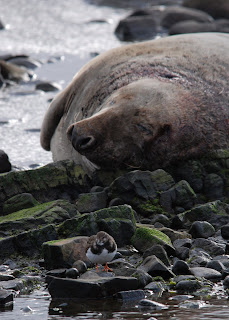 Bull seal taking it easy (David Andrews)
Saturday 6th November comments: Its been a quiet period on the Farnes in recent days although the islands eventually closed to the public at the end of October, albeit on a disappointing note, as we were only open twice during the entire half-tern period (the weather really is 'king' out here).
The team having been working hard as ever, from digging ponds to closing down the islands, ready for the winter (its that time of year again). We've also been active in the Grey Seals colonies counting new born pups, which have increased significantly in number since I last put an entry on the blog. The predominately westerly winds have brought very little in the way of bird migrants, but that may change next week as they are forecasting big easterly gales. However if those huge storms do materialise (expected Monday-Tuesday) the Grey Seal pups won't be finding life as easy as it has been...watch this space...
Latest Seal pups totals:
South Wamses 235
North Wamses 200
Staple 107
Brownsman 96
Northern Hares 16
Big Harcar 1
Overall total: 655
Posted by Farnes at 21:25

Thanks for the pictures and new blog , hope the weather is not too bad when it hits you and those little pups keep safe , have been watching the live webcam from the Orkney Islands where Gordon is this year and it has been very interesting - can you persuade National Trust to get one rigged up on the Farne Islands David so we can watch ?????