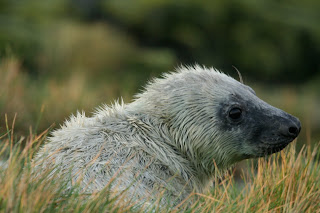 Safe and sound, a Seal pup on the Farnes 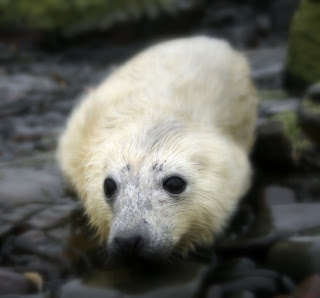 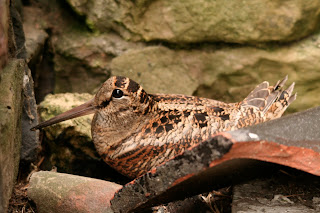 Woodcock - one of several moving through today
Tuesday 9th November comments: Its been an epic day as the storm raged and the sea boiled, whilst the warden team stood back and admired the chaos around them. The North Sea is the last place anything or anyone wants to be at this moment in time and for those newly born Seal pups, they must wonder what kind of crazy world they have been born into. Its a fact of nature and the brutal realism of the Farnes, but not all will make it but we'll not know the extent of the damage until we return to the colonies, but that may be some time....the gales continue....
On a positive note, passage of seabirds kept us entertained with good numbers of Little Auks alongside a few other noticeable highlights, including a returning wintering Black Guillemot and our first Glaucous Gull of the autumn. However the star bird of the day was a little Siberian waif, a Pallas's Warbler, which graced Inner Farne. the bird, found early in the morning, is our second of the year and 17th ever.
Tuesday 9th November highlights: Little Auk 1,731 south, Great Northern Diver 2N, Red-necked Grebe, Sooty Shearwater 4N, Common Scoter 226N, Velvet Scoter 8N, Scaup 8N, Long-tailed Duck 20N, Tufted Duck 1N, Goldeneye 5N, Goosander 1N, Red-breasted Merganser 3N, Great Skua 5N, Arctic Skua 1N, Little Gull 1 south, Glaucous Gull immature, Black Guillemot 1N, Merlin 2, Peregrine 2, Woodcock 7, Chiffchaff 2, Pallas's Warbler 1 on Inner Farne all day – our second this year! and Common Redpoll 2

Thanks for another quick update , lovely pictures . You always amaze me with your knowledge , I cant even identify the birds in my garden sometimes !!! I had to look up Pallas's Warbler and for those like me who have no idea what it looks like here is a link !! http://www.davegifford.co.uk/index.php?showimage=144

Me again !!! hope all is well weather wise and those little pups are doing okay , been trying to drum up support for you and your site on the Autumnwatch seal blog , loads of people in favour of a webcam on the Farne Islands next year so are you ready for it ??? !!! I think it would be really good but then I am perhaps biased

Great photo's as always. I hear a pup made it across Staple Sound to Inner Farne?? That's got to be one lucky little guy.

Hi David,
Give us a bell if you can about the Farnes book. Or email me. Don't want to leave details on here, but you have them somewhere I hope. Looking to publish in April and need to get your input. Thanks.
Cheers,
Kaleel Zibe