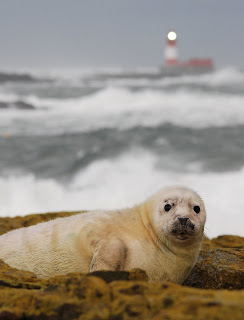 A Seal pup on Brownsman with Longstone in background (David Andrews) 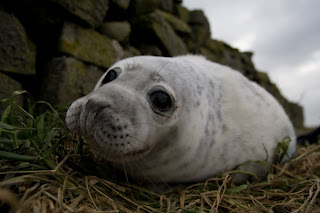 You looking at me? Seal pup up close (Graeme Duncan)
Thursday 25th November comments: It’s been an interesting time for the Grey Seals on the islands as unlike the previous year, we’ve had some serious storms from the north and east (bringing with it, some huge swell). As well as cold temperatures (not that Seals are bothered about cold temperatures!) but the seas have been mountainous. Although its early days, we’ve certainly lost Seal pups but we expect that on these small rocky islands, as nature can be a cruel mistress.

Despite the weather (ranging from biting northerly winds to sleet and hail), the team have got on with work and we've been active on the colonies. At one point, we took shelter behind a rock face from a sleet storm and were joined by two Seal pups - we couldn't blame them, its was horrendous. Regardless we;'re still not finished and I would not be surprised if we even got snow over the next few days, its that cold!

Thanks for the update . Was thinking of you all yesterday when there was a lot of snow around the Northumberland area , keep safe everyone .

Unfortunately on Beadnell Bay Beach today there are 2 little dead seal pups. It's so sad that the weather has turned so bad just as these babies are born.