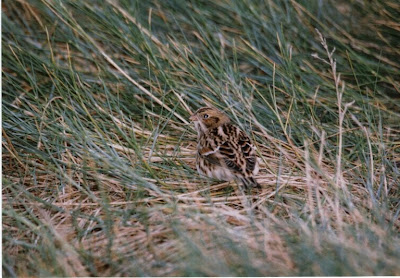 Lapland Bunting, the first of the autumn 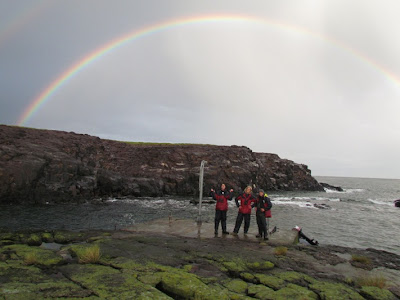 Rainbow team - another mixed weather day on the islands
Wednesday 21st September comments: Its been a quiet start to the week as westerly winds have continued to dominate (nothing new there then!) bringing very few migrant birds. However the Farnes being the Farnes, we still have produced some highlights including two Lapland Buntings over on Monday, the first records of the year. Following last seasons impressive haul (unprecedented numbers across the UK), we're hoping this is a sign of another good year.

Today brought a major highlight as (unexpectedly) seawatching produced a stunning seven Long-tailed Skua's, the islands highest day total since 1995. The birds were seen within a two hour period (just after midday) and the passage all involved juveniles all heading north. The birds were split between Staple Sound and the south end of the islands, although one bird decided to fly over the Big Harcar, close to the observers on Brownsman. A cracking find on an otherwise uneventful day...

I mention uneventful day, the wind has once again kicked in and we're cut off from the outside world (which has been common place in recent weeks). It's hurricane season and don't we know it. Bring on some settled weather.
Posted by Farnes at 22:01

I like the new-look blog. I didn't even contemplate seawatching today with these westerlies (and a bit of post-holiday birding blues)

Hi Ipin, aye we didn't until we were lucky enough to spot the first Long-tailed! Nothing moving today, all quiet although Curlew Sandpiper returned to pond.