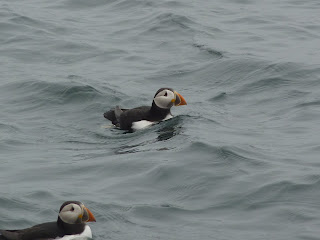 Monday 12th March comments: Look who's back! Following a visit to Seahouses today, I was informed by several boatmen that the first Puffins have arrived back into 'Farnes waters' (as predicted two months ago!). Up to eight were seen around the Farnes yesterday although these early returnees have yet to sample life back on the islands.

It'll be some time before the birds set foot back on the islands (the birds last touched land eight months ago - yes they really have been at sea since August). Puffins will gather in numbers over the next few weeks and then eventually in late March, will touch-down on the breeding colonies and life of the Farnes Puffins will begin. I'm delighted the birds are returning but what kind of winter it has been for them is unclear, as only time will tell. Fingers crossed it's been a good one and we have plenty of birds to report when the rangers arrive next week.
Posted by Farnes at 17:35