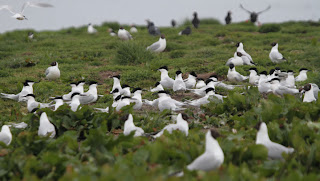 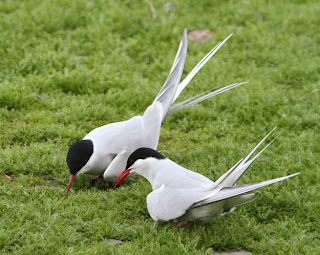 Arctic Tern grounded for first time (Mark Breaks)
Tuesday 4th May comments:
Today brought brighter, calmer conditions as the wind eased and the sun came out. It wasn’t just the sun which came out, as the Arctic Terns landed on the islands for the first time – displaying and calling loudly as they checked out traditional breeding grounds. So they’re back and preparing for the breeding season – so the wardens will have to be prepared and armed with hats because they’ll know about it if they don’t wear them!

The build up to the first of the crunch football games against the boatmen continues but the kick-off has been brought forward – to tomorrow evening! The team tactics and positions have been discussed and hopefully we’ll have some success this season – but you’ll have to wait for the match report on Thursday morning before all is revealed. Wish us luck – we’ve had plenty of messages of support and let’s hope the wardens can do it this time.

Hey just realised that you have said that is a White Wagtail - now I didnt know there was such a thing but I have looked it up !!! So there I was excited at pic of NOT a Pied Wagtail oh well , would love a pic of the pied and then I can get excited !!! So good luck for the footie and discount my message from before but please listen to this football song http://www.youtube.com/watch?v=caglaXJP-3E

Looks like we're in for some northerlies over the weekend - best get them hatches battened down!

My money's on the boatmen BTW

Good luck with the game guys!