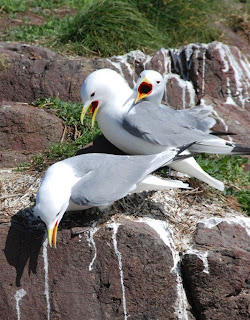 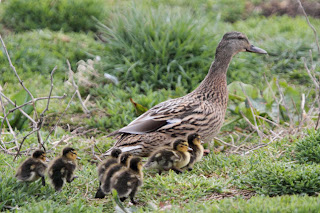 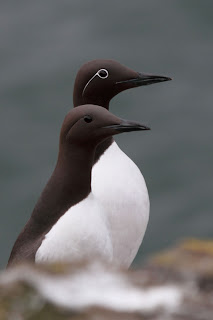 Guillemots on the cliffs
Sunday 2nd May comments:
Its been all go over since I last updated – a combination of staff shortage (the majority of the team have been away on a boat training course) as well as induction days for two new members of the team, weather and the onset of the hectic breeding season has resulted in a fewer blog posts than I would have liked!” However fear not, I’m back and expect regular updates from hereon in. So what’s happened since last weekend…read on…
The breeding season continues with pace as the first Kittiwake eggs were discovered on 26th April and more have been discovered since. The significance – the first Kittiwake eggs in April since 1989 - the early start to the season continues! Ringed Plovers have re-nested following their egg predation in mid-April, whilst four Pied Wagtail nests have been discovered across the islands – one pair using the traditional nest site in St.Cuthbert’s Chapel.
Its not all about eggs – Shags have now got young – the first chicks started hatching on 30th April. However the Terns have yet to settle, although numbers are increasing nightly with over 1,2000 Sandwich, 1,000 Arctic’s and 36 Little Terns graced the islands roost last night. Migration through the islands has continued to bring some exciting discoveries with highlights over the last few days shown below.
Monday 26th April: Shoveler 4 in Kettle, Little Tern 1 (first of the year), Swallow 31N, Dunnock 1, Black Redstart female on Brownsman, Song Thrush 1, Wheatear 8, Willow Warbler 8, Chiffchaff 2, Whitethroat 1, Rook 2 over and Reed Bunting male on Inner Farne
Tuesday 27th April: Peregrine 1 immature, Tufted Duck male north, Red-breasted Merganser female north, Red-throated Diver 4N, Grey Heron 1 west, Common Scoter 42N, Yellow Wagtail male east over inner group, Dunnock 2, Wheatear 2, Blackbird male, Willow Warbler 3, Chiffchaff 1 and Linnet 3.
Wednesday 28th April: Pink-footed Goose 290N, Whimbrel 1, Common Sandpiper 1, Swallow 6N, Ring Ouzel 1 male lingering on Inner Farne (3rd of the spring), Yellow Wagtail male over, Wheatear 25, Dunnock 1, Blackbird male, Redstart 2 (pair), Blackcap male, Whitethroat 2, Willow Warbler 12, Chiffchaff 3, Linnet 1.
Thursday 29th April: Wood Pigeon 1, Wheatear 27, Whitethroat 2, Sedge Warbler 1, Willow Warbler 10, Chiffchaff 2, Blackcap 1 female with very pale wing panels (like a Black Redstart!).
Posted by Farnes at 21:29

Photos are once again amazing thank you . Thanks for update always great to hear what is going on on the Farnes , can't wait to pay you a visit in June again still not sure but think it will be mid June on my way back from Loch Garten , going to Kielder on my way up so may not have time then so wont be in such a rush on the way back - I need to plan !!!!! Sounds like things are hectic , do hope you have had a busy weekend and the weather has been kind to you . Pied wagtail is my very favourite little bird , would love a picture please , never see many of them in my garden - thank you in hope !!! . Take care all .