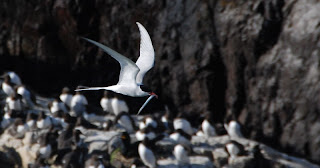 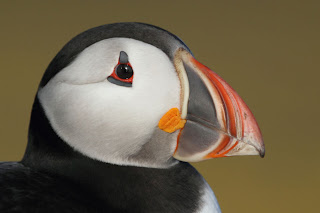 A Farne classic - a close-up of a Puffin 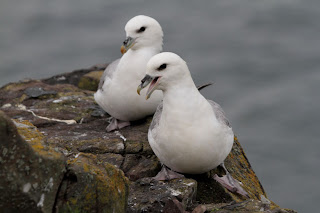 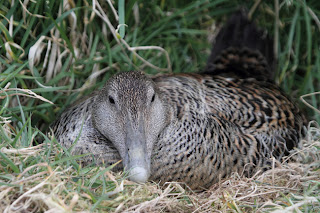 Down in numbers - nesting Eider
Monday 18th May comments:
How quick is the season going – it doesn’t seem five minutes since we sailed to the islands and now we’re celebrating the first Eider and Guillemot chicks! As well as chicks, Arctic Terns have landed in huge numbers and the first eggs were discovered on the early date of 13th May but now the islands are littered with eggs - and yes, the first attacks on visitors have started - you've been warned (bring a hat!). The glorious sunny weather has resulted in good conditions for visitors and seabirds alike, so everyone (so far) is happy!
Latest seabird breeding information:
Fulmar - first egg discovered on 13th May - earlier than normal
Shag – most now have chicks
Eider – first chicks on 15th May following the first eggs on 17th April. Numbers appear low this year.
Sandwich Tern – the colony on Inner Farne grows ever larger with the first eggs discovered on 4th May. A small number are nesting on Brownsman with the first egg discovered on 18th May.
Arctic Tern – first eggs discovered on 13th May - now eggs everywhere and starting to attack people...
Puffins – still very settled on eggs with chicks probably about one week away from hatching.
Guillemots – first chicks on 15th May, with many more to follow
Razorbill – chicks should hatch within the next week
Recent Highlights: Roseate Tern for previous three days (since 14th May) whilst a Long-eared Owl was a major highlight on 12th May. A pair of Pintail graced Brownsman Pond whilst five Tufted Ducks moved north today. However migration has been slow with very little else happening.
Posted by Farnes at 21:53

Did you ever get your wagtail sorted out? have a look at the NTBC website for the pics of the Whitley Bay bird...