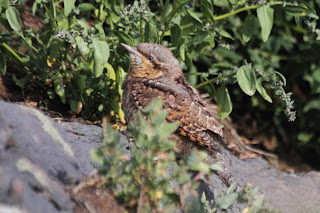 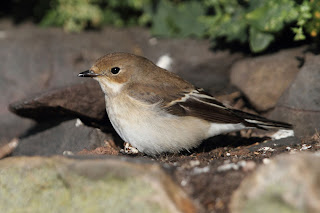 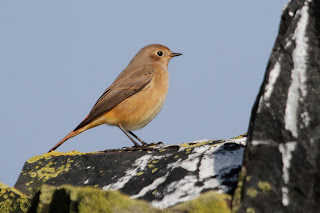 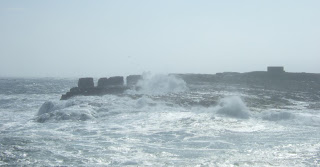 Staple Island being battered (Tom Simon)
Tuesday 7th September comments: WHAT a day! The strong south-easterly winds continued to dominate, backed with driving rain in the morning which eased early afternoon – we even had bright sunshine later in the day! The islands remained closed as the seas were monstrous (the islands were battered) and we probably won’t be open until Thursday at the very earliest.

However all eyes were focused on the islands, as large numbers of common migrants were grounded with the odd rarity chucked in for good measure. It was an excellent day (see below) and the next few days should bring even more...bring it on!
Major highlights:
White-tailed Eagle – still present on Staple Island
Wryneck - for second day on Brownsman
Marsh Warbler – on Brownsman - first ever Farnes autumn record
Wood Warbler – on Inner Farne
Ortolan Bunting – 2 immatures together on Inner Farne
Lapland Bunting – 3 still on Brownsman

That's an amazing view of the pinnacles!