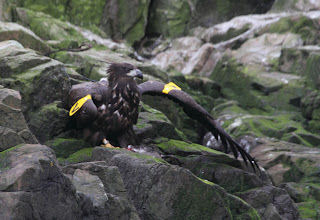 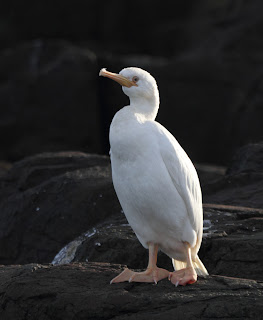 An unusual visitor...
(by Mark Breaks)

Tuesday 1st September comments:
Day four and our Eagle remains. The monster is still present on Staple Island and is being enjoyed by all those who visit the islands (he’s pretty obvious especially when he decided to sit on top of the old lighthouse ruin on the island!).

Claire Smith (East of Scotland Sea Eagle Officer) has been kind enough to forward some information on our bird. The Eagle, is a male, released in Fife on 19th August and was actually one of their smallest (weighing ‘only’ 4.1kg on release – females can weigh up to 6.5kg!). The bird is approximately four months old and it appears that it was carried south with the strong winds at the weekend until it reached the Farnes. Another bird (Yellow tag I), has reached the Isle of May over the same period! It's also only the third time (in four years) that release birds have made it to England but the first ever occurrence on the Farne Islands. Its an incredible visitor and one which many people in this area will long remember.
However it wasn't just the Eagle catching the eye on Staple Island, as a complete white Shag arrived late Monday afternoon - our first since one was born on the same island in 2002. The very odd looking bird certainly stands out amongst all the other Shags, but then again, that might not be a good thing considering the same island is boasting a Shag eating Eagle... Watch out my friend.
So its all go on the Farnes - its never a dull place and I suspect we will have more to follow, so stay logged on...
Posted by Farnes at 22:53

Oh Lucky people on the Farnes , something I have yet to see a white tailed sea eagle oh and also a white shag - hopefully eagle does not eat shag !!!!! just caught up on all your news sounds like The Farnes are a great place to be at the moment , take care all hope your weather is being kind

Seen white tailed eagles in Mull last year and this, the adults are stunning bird and...well...HUGE!

How great that you can trace "your" bird by the wing tag, and that White tails are being seen in England again.

if you're ever stuck for something to read, try The Stonor Eagles by William Horwood.