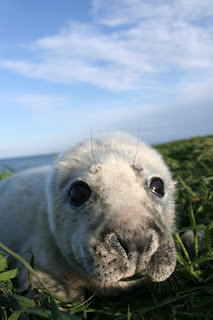 
Saturday 18th September comments:
It’s been a quiet week, as westerly winds have dominated (although not reaching 412mph!!) and bird migration has been restricted, in fact we’ve been closed to the public for two days due to strong winds! However the wind has eventually eased today, and birds have started moving including our first Geese of the winter whilst 82 Sooty Shearwaters was noteworthy.
However big news belonged to the Seals, as our first pup of the year was born on the South Wamses, opposite Brownsman. How time flies! It feels just a few months ago that we were saying goodbye to our last Seal pups and here we go again. The autumn is upon us and its seal pup time…bring it on.
Our other bit of major news involved our resident White-tailed Eagle. The bird, having been content on Staple Island for some time, lifted off the island yesterday and moved south, some way out to sea on the back of a strong westerly wind. The bird appears not to have returned to the islands (we’ve not seen it in over 24 hours) and we now wonder if the bird reached the mainland south of the Farnes – so watch out, our barn door may be on mainland Northumberland!
Todays highlights: Sooty Shearwater 82N, Manx Shearwater 26N, Brent Geese 23N – first movement today, Pink-footed Geese 80 west, Velvet Scoter 1 male north, Red-breasted Merganser 8N, Lapland Bunting 1 west over Inner Farne.
Posted by Farnes at 20:19

Awww, what a lovely photo of the seal pup. :) I'll be watching out in the media for news of the barn door!