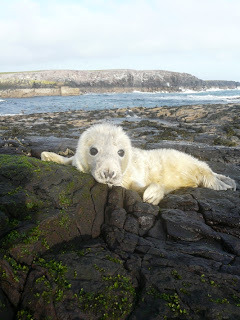 Not a care in the world, a Staple seal pup (David Steel) 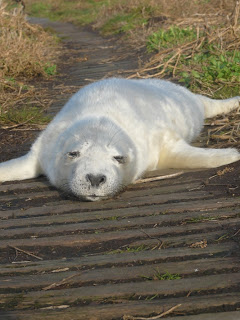 It's my path now, a sleeping pup (Ciaran Hatsell) 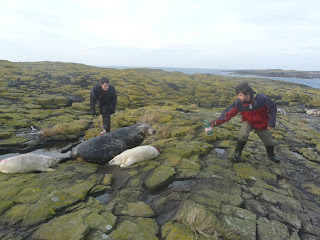 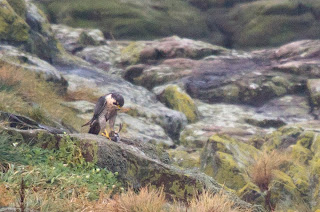 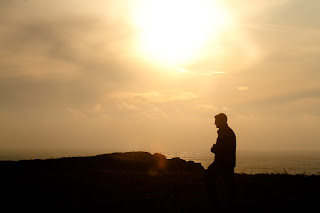 Birding on the Farnes (Graeme Duncan)

Thursday 3rd November comments: It's been a while since the last update although it relects the busy times on the islands at this moment. We eventually said goodbye to our last visitors of the year on Monday as Inner Farne closed until 1st April 2012. It really doesn't seem that long ago that we were opening up the islands back in the spring and where has time gone!?

Following the closure we've been packing down Inner Farne as St.Cuthbert's chapel windows were boarded up for the winter (with protective shutters), the boundary ropes were taken down and the benches stored inside for the winter months ahead. Eventually after cleaning the Pele Tower from top to toe, the final five wardens moved onto Brownsman for our last month on the Farnes.

We've also managed another count of the Grey Seal pups, as we marked pups with red dye - we now have blue, yellow and red marked pups. The colonies appear to be doing well as we have now reached 704 pups - a very healthy total for the time of year.

As well as pups, a few birds have dropped in, with highlights of Water rail, Long-eared Owl, two Black Redstarts and daily sightings of Little Auks (with a peak of eight today). A partial summer-plumage Great Northern Diver is lingering whilst Black Guillemots have returned to winter with a lone individual recorded on two dates. However if you were a passerine, Brownsman was not the place to be today, as we entertained two Peregrines, a Merlin and a Sparrowhawk. Those migrating Thrushes were keeping their heads down.
Posted by Farnes at 20:36

Hi folks do hope you are all keeping well on The Farnes , I know it is a hectic time for you all . I have memories of 3 years ago when GB was out there with Autumn Watch , I wonder where Lucky and Archie are now ?? My little grandson Archie is 3 tomorrow so will be thinking of all the little seals being born , Archie will be told the story one day when he is old enough and I will bring him to the Farnes for sure .
Take care everyone you do a wonderful job thank you xx