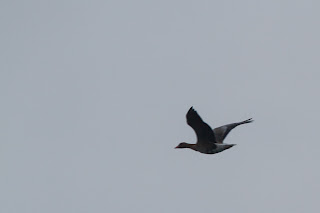 Not the best photo but its a White-front! (Graeme Duncan) 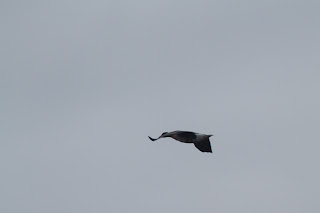 First since 1997 - White-fronted Goose over the islands (Graeme Duncan) 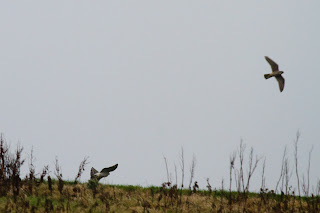 Get out of my patch - Merlin dive bombs Sparrowhawk (Graeme Duncan) 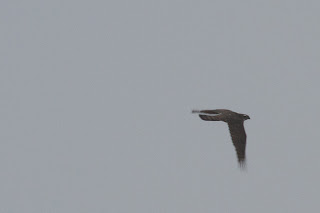 Thursday 10th November comments: It's been another busy period as we've spent the entire day out on the seal colonies, counting and marking more pups, just before our next storm moves in. The Seal colonies have been full of activity in the past few days, as we've seen an increase in young pups making it to independence, as well as more youngsters born. Alongside this, mating has started between parents whilst we've seen some epic battles between rival bulls and at times, this is better than Eastenders!! Our latest count brings the overall autumn tally to a very healthy 1,067 pups.

On a completely different note, for those of you who have been watching the brilliant (it really is mind-blowing) Frozen Planet, the Farnes team loved the dive bombing Arctic Terns last night - hitting and drawing blood on a polar bear. No one messes with an Arctic Tern! (remember that when you visit next summer).

On the bird front on the islands, yesterday produced a stunning discovery - a White-fronted Goose. The lone bird flew low over Brownsman and Staple Island and brought great delight, as it remains a very rare bird out here, with just four previous sightings, this was the first since 1997. Other highlights included an influx of Woodcock along with the usual Thrushes. Little Auks remain resident with up to 14 yesterday lingering in Staple Sound and a scattering of other birds including a large Sparrowhawk which was seen off by a resident Merlin. With another storm on its way, anything is possible over the next few days, but maybe not a Polar bear. Then again...
Posted by Farnes at 21:40