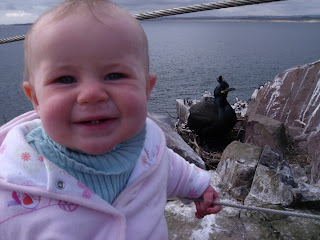 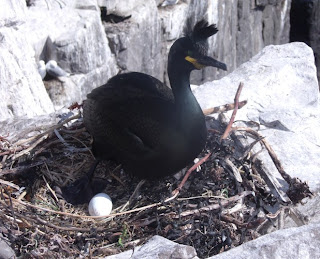 On show - a nesting Shag on nest with egg 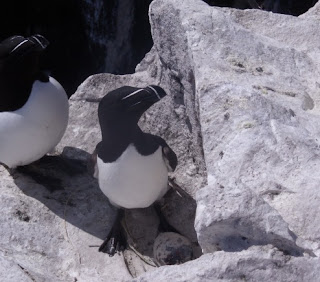 Our first Razorbill eggs
Wednesday 21st April comments:
It’s been all go as the hectic pace of island life continues. The rapid start to the season continues as the first Razorbill eggs were discovered yesterday – the earliest ever in Farnes history and another record broken. Despite the quick start we’re still waiting the arrival of some birds, most noticeably the Arctic Tern, although it’s only a matter of time.

The number of pairs of Puffins and Guillemots on eggs has increased again and as the Sandwich Terns settle in the main colony, it may be only a matter of days before we report those! On a sad note, the Ringed Plover nest was predated, with the chief suspect being an Oystercatcher, but thankfully (and as expected) the Plovers are having another go.

Monday proved to be a proud day for one ex-warden of the islands as St.Cuthbert’s Chapel on Inner Farne welcomed some special guests, as friends and family of David (ex-Farne warden from 2003-04) and Susannah Parnaby visited the islands for a blessing of their daughter; Grace. The short service, delivered by local vicar Jane Wood, was well received and although we do have several services a year, its only our second blessing in modern history. Following the service, Grace was introduced to the breeding seabirds of the islands and I’m sure she’ll be back with her family in future years.

On a personal note, a well-known BBC politics show phoned me asking for comments on the Liberal Democrats chances at the up-and-coming general election. Slightly confused, I inquired why they wanted comments from the head warden of the Farne Islands – before they realised I wasn’t Lord David Steel…..not yet anyway.
Posted by Farnes at 21:43

Aaaaaah Grace is a stunner and looks like she is happy amongst the birds . Other pics are superb as well as normal . Poor ringed plovers lets hope second time will be good for them .
Are you joking about the phone call ???? if you are serious how weird , what you should have done is put on a posh voice and said not a hope in hells chance and said some rude things about Nick Clegg just to see if they reported it !!! Well Lord Steel take care and may the weather be with you .

I can't think of a nicer place to have a blessing. Grace is beautiful!

Oh how wonderful to have Grace's blessing on the islands, and such a lovely little girl with a lovely name.

You deserve a peerage - and the others can have knighthoods. I mean, all you need is enough money to pay for them...

My word. Mr Parners a dad!!! And you me dear! Lord Steel! hasn't time changed us all!!! Saw you on yet another TV apperance the other day, liking the new grey hair look! (same as mine actually!) Glad you are still birding away. are they ever going to be able to remove you from those islands!?!
Get in touch! look me up on facebook or something!
big hugs
Olwen Armstrong
xx