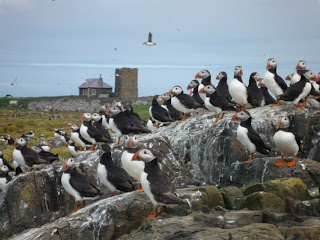 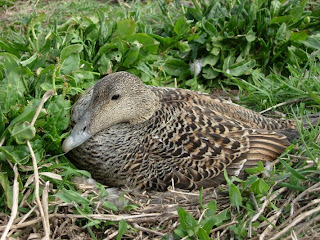 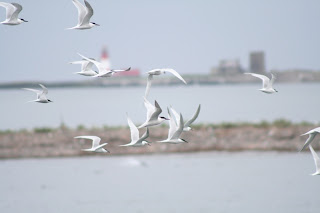 Sandwich terns settling early
Sunday 18th April comments:
Take it from me – the seabirds have started early and I mean early. The generally settled weather has allowed birds to arrive early and to get on with the business of breeding. We’ve had Shags on eggs since late March, the earliest ever Guillemot eggs and now we’ve now gone one better – Puffins on eggs! The early start has even brought Sandwich terns onto the island, inspecting nest sites – some two weeks before we expect that behaviour. I’m not sure what is going on, but we’ll blame climate change or too much ash in the atmosphere. Regardless of what is happening – it’s been a strange start to the 2010 season – let’s just hope the birds don’t regret the decision to start early in the near future.

It remains quiet on the migration front with light scatterings of Wheatears, Chiffchaffs and Willow Warblers moving through the islands. A male Ring Ouzel graced Inner Farne yesterday whilst the female Sparrowhawk reappeared, but lets hope she does not linger for too long!
Posted by Farnes at 21:07

Great to see you have good weather and lots happening by the looks of it , I am sure things will be okay hopefuly they are not getting covered in ash !!! Thanks again for the great pics , cant wait to come back in June and see Puffins . Any news on the etching yet ???