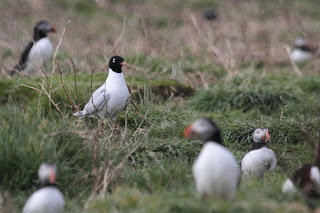 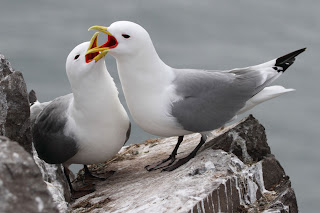 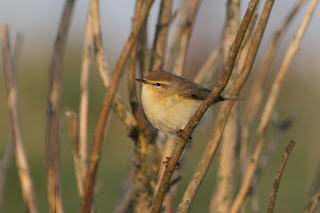 Chiffchaff's on the move
Thursday 15th April comments:
The (reasonably) fine weather continued although with a slight chill in the air as the light wind was moving in from the north (which was bringing volcanic ash from Iceland apparently!). The breeding seabirds continued to come and go, with Shags well settled, Guillemots laying eggs but the real stars; the Puffins, continued to remain elusive (on occasions). However the major discovery of the day was the first Ringed Plover eggs of the year, on the beach on Inner Farne. The number of Sandwich Terns in the evening roost continues to increase daily (as shown below) and the first Arctic Tern will only be days away.

Interestingly, the Mediterranean Gulls remain including at least one second-summer bird lingering in the large Black-headed Gull colony. Otherwise it’s quiet on the migration front with just a smattering of passerines.
Posted by Farnes at 21:21

MArk's getting some nice pics there steely! Thanks for sortin gout the Young Rangers...hope to get out soon I

some great photos - any more news of the puffins?