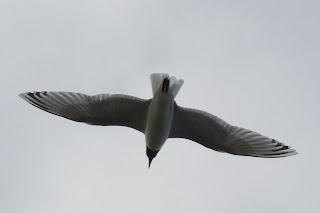 Second-summer Mediterranean Gull over the islands 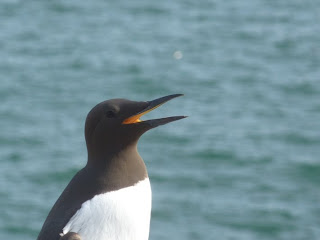 Monday 12th April comments:
The fine, settled weather continued and at times, the North Sea resembled a pond – it was that calm. The breeding birds have continued to settle and the early start to the season continued – we’ve now got Guillemot on eggs! The first Guillemot eggs were seen on the cliffs of Inner Farne – some seventeen days earlier than two years ago! However more unexplainable was the lack of Puffins – the entire population departed for the open sea, disappointing the visiting public in the process. Despite the absence, it was still a very pleasant day to be on the islands.

On the migration front, the number of Mediterranean Gulls has increased – we’ve now got four with two second-summer birds (potential breeders). Other birds of note included a male Velvet Scoter through Inner Sound (with the lingering large Common Scoter flock) and some impressive Corvud passage.
Posted by Farnes at 08:56

The puffins have been hit and miss at Bempton too so far this year.

Hope the Med Gulls breed! They're top birds. We've got nearly 40 at Mins but I still never tire of them!

I was very pleased to discover yet another excellent NT blog - great to see these stories from the Farne Islands. I have just started a blog about NT acquisitions (http://nttreasurehunt.wordpress.com/) and I thought minhe was the first - how wrong I was!

worried about the lack of puffins - seemingly not just at the Farnes.

There's a nice little piece by Gordon Buchanan in BBC Wildlife magazine this month - article about Nature with the Family - and Gordon's piece is about him bringing his wife and kids to the Farnes.