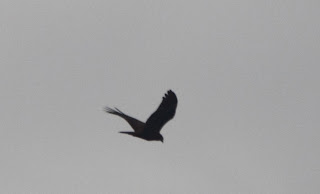 Marsh Harrier over - a record shot

Sunday 25th Highlights:
It’s been a cracking few days over the weekend as the breeding season has intensified and summer migrants continued to pour through the islands including an impressive two Marsh Harriers. The first Black-headed Gull eggs were discovered whilst nesting Eiders have increased in numbers. The auks have completely settled with vast numbers of Guillemots, Razorbills and Puffins on eggs. The Terns continue to increase daily with Sandwich Terns as vocal as ever as they display over the islands whilst Arctic and Common Terns are starting to creep back.

The migrant front brought a deluge of summer migrants including two Marsh Harriers – an impressive sight anywhere never mind a seabird colony! However the ‘bird of the day’ award went to a very confiding Grasshopper Warbler which decided not to fly away despite two wardens (on hands and knees) approaching within 2 feet of it! On a personal note, the award for 'getting away with it' went to my football team Gateshead, who (somehow) managed to escape relegation on the final day of the season in the Conference on goal difference - by just three goals. What a weekend I've had...
Sunday 25th April Highlights: MARSH HARRIER 2 - female west at 10:00 over the inner group, then ANOTHER over at 17:30. The second bird was raggedy-winged indicating a different individual to the bird seen earlier in the day. These represent the 20th & 21st Farne Island records. Also Common Sandpiper (first of year), Sandwich Tern 730, Arctic Tern 6, Common Tern 12, Tree Pipit (first of year), Redstart female (first of year), Wheatear 8, Blackbird, Dunnock 3, Grasshopper Warbler 2 (first of year), Sedge Warbler (first of year), Lesser Whitethroat 2 (first of year), Whitethroat 3 (first of year), Willow Warbler 15, Chiffchaff 3 and Blackcap 3.

Things are getting busier! Hope you're enjoying good weather there.