Summer on the way 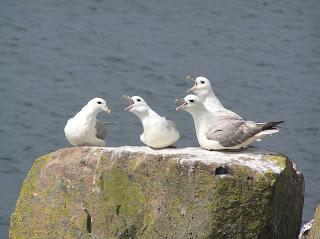 Having a gossip - Fulmar's on the cliff tops 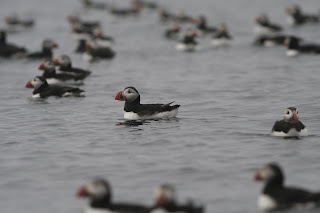 Saturday 10th April comments:
Its been an excellent week as high pressure has dominated over northern England, resulting in warm sunny conditions with very little wind. The breeding seabirds of the Farnes have responded well and with summer on its way, it business as usual.
The Auks - Guillemots, Razorbills and Puffins all seem very settled, whilst Kittiwakes have started nest building. Shags seem content with their early start and Cormorants are on eggs on the main colonies on the East Widesopens and North Wamses. The pleasant week has also encouraged the first prospecting Eiders whilst Ringed Plover display daily over the beaches. Sandwich Terns have now peaked over 100 in the roost whilst the first Arctic Tern is surely only days away.
Interesting a second-summer Mediterranean Gull has settled in the main Black-headed Gull colony on Inner Farne and will it attract a mate? This delightful Gull is gradually colonising the UK with the first confirmed breeding in Northumberland last year - are we about to add it to our long list of breeding birds? The islands are also supporting a first-winter 'Med Gull' as well, so its keeping the resident warden team entertained. Speaking of the team, the new lads are settling in well and already we're in practice for the annual football games - loosing both last season (2-4 and 3-4) still sticks in the throat a bit.
On the migration front, meadow pipits and Skylarks have been moving north whilst the female Sparrowhawk (a scarce bird on the Farnes) remains with us but will soon move off. Raptors in general are scarce on the islands (we have no breeding raptors) although we're watching those skies, as Ospreys are heading north. Its never dull out here, especially at this moment. Role on the summer.
Posted by Farnes at 13:37

So glad youve had some good weather as well . Been beautiful down south for 3 days now , went down Thorney Island near Chichester Sussex on Thursday Osprey hunting and not a sign but it was a lovely day , then today on Bird guides what is down Thorney Island an Osprey!!! and seen fishing aaaaaaaaaargh I would so love to see one fish . One day one day .
Any news yet on that Etching ???

Thanks for answering my question about sparrowhawks/raptors on the Farnes. Mine have a nice fast food joint at my bird table if I'm not vigilant (or the small birds aren't on the ball!).
I adore the puffin pics, we got some great shots on the Treshnish isles last summer and I had fun lying for hours on the cliff top with puffins so curious they almost walked over me.