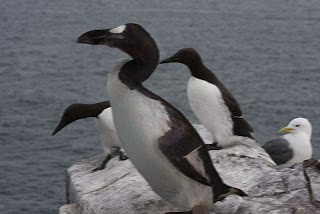 Friday 1st April comments: This morning resident warden Graeme Duncan snapped a shot of a bird on Lighthouse cliff on Inner Farne which has proved to be that of a Great Auk. The species, last seen in 1840 on the outer reaches of northern Scotland, was seen briefly, allowing Graeme to snap the above photograph.
The news will shock and rock the birding world, as many have considered the species to be long extinct. The sighting has raised hopes of an undiscovered relict population which will hopefully re-colonise the Farnes in the near future.

Following much jubilation amongst the warden team, the bird moved off towards the nearby West Wideopens but has not been seen since. The bird appeared in good health and associated with the nearby Guillemots and we’ll keep everyone informed of any future sightings. WHAT a morning.
Posted by Farnes at 00:25

I understand Lee Evans is currently mustering the masses a Seahouses! Brace yourselves!!

You have to catch it. Apparently they're delicious roasted with garlic.

is this for real? how did they survive undetected? this would be the first photo of one ever..

Look at the date, dummy!

Noooo. Don’t do that