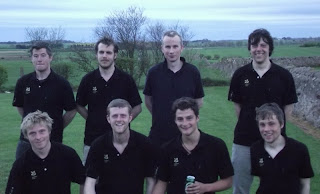 The warden football team (after the match!) (Wez Smith)
Farne Island Wardens 4 – 5 Seahouses Boatmen
Wednesday evening witnessed the first of the football clashes between the warden and Seahouses boatmen and what a clash it was! The first half was a typical tight affair with very little between the two teams before the boatmen broke the deadlock through Mickey Craig. However the wardens replied soon after through the brilliance of new warden Ciaran and with the game ebbing and flowing, it was the boatmen who raced into a 2-1 lead, as Danny P rifled home just before half-time. Half-time Wardens 1-2 Boatmen

The second half witnessed plenty of drama as the game appeared to be escaping the wardens, as a fine strike from Craig Pringle put the Seahouses men 3-1 up. However the goal appeared to galvanise the wardens who soon responded in fine style, smashing three quick goals (including a hat-rick from Ciaran and a fine team goal with Jamie finishing it off, to turn the game on its head at 4-3.

However the final 15 minutes witnessed a warden collapse as the island men scored not one, but two own goals to give the Boatmen a 5-4 lead in a thriller of a match. I won't name the own goal scorers, but the head warden can claim one.... With minutes remaining the wardens rallied for that elusive equaliser and despite intense pressure, could not find the break through. The boatmen hung on for a 5-4 win and everyone enjoyed the first game of the season although maybe not for me, who scored an own goal and was briefly knocked out and minus a tooth by the end of the game. Who said it was a friendly!? Role on the rematch.
Posted by Farnes at 20:25

Oh dear oh dear oh dear - really lets face the score was 6 3 to you , who cares what end you scored the goals - never did understand !!! hope it wasnt one of your front teeth David - that is going to cost you !!!! and knocked out my goodness me the ref should have sent the boatmen off - all of them !!!
Hope you have all recovered and can just remember the good bits - well done Ciaran , next time get em !!!
Hope all is well is birdland - have just booked the B & B in Seahouses coming over 26th July just for a short visit with a good camera !!! please let the sea be calm that day as it is my only opportunity !!