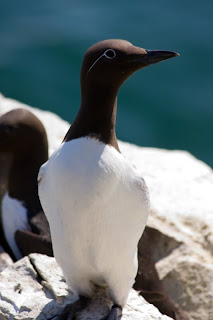 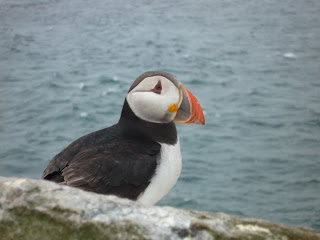 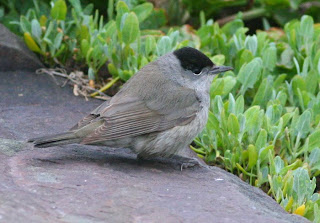 Male Blackcap - migrants on the move

Sunday 10th April Comments: Each year I seem to report we've had 'another record quick start to the season' and here we go again as more record fall. This year the Shags were off to a flier (no pun intended) as eggs were laid on 23rd March and yesterday we discovered the earliest ever Guillemot eggs! It’s a stunning start and no doubt the question will be raised as to why we have had such an early start to the season but we may not really know the answers to the quick start. Certainly the settled weather is helping and long may it continue. On the islands, the warden team are happy as each day brings something new and exciting whilst visitor numbers are increasing slowly with the onset of fine weather and the Easter holidays. Migrant birds are moving through on a daily basis whilst the breeding seabirds are establishing themselves on the cliffs and island 'tops'. Its all go as Spring is well sprung.

Shags – settled on many pairs on nests

Guillemots – first eggs on 9th April – the earliest ever laying date on the Farnes!!

Puffins – settled on islands with nest scraping and copulation noted

Common Tern – a single on 6th April was our earliest ever

Kittiwake – nest building across the colonies

Swallow 6 over on 7th April - first of the year

Chiffchaff – first of the year arrived on 3rd April

Willow Warbler – 2 - our first of the year arrived on 10th